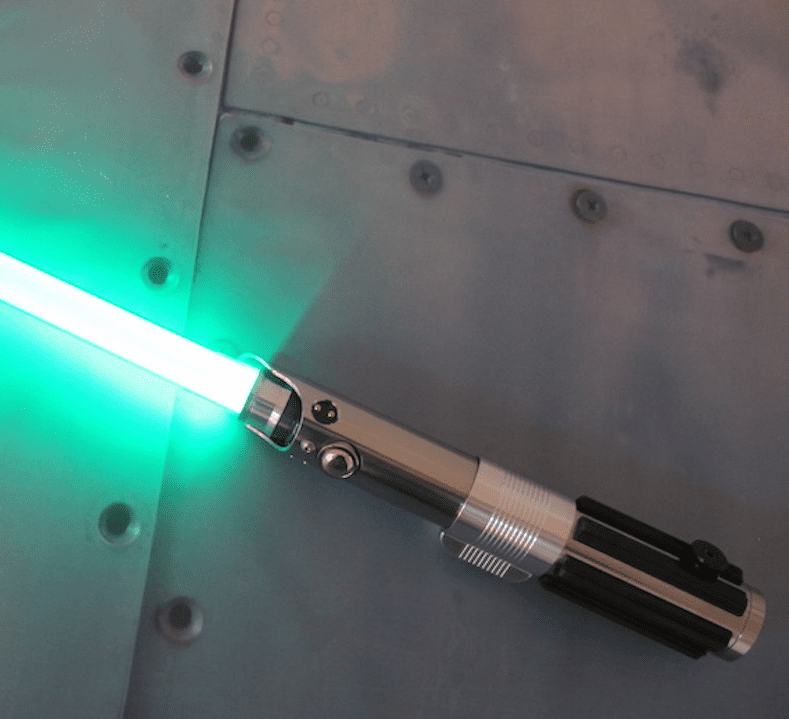 Anakin’s Lightsaber: The Most Storied Weapon in All of Star Wars

There are a number of ways that lightsabers can achieve notoriety. Some are renowned for their unusual design (the crossguard lightsaber), others for their scarcity (the Darksaber), and still others for their association with one or more illustrious personages. Anakin Skywalker’s blue lightsaber belongs to this third category. In the Star Wars universe, it is also known as Luke’s lightsaber or Rey’s lightsaber, depending on the time frame in question. Here on Earth, it is known as the “Graflex” lightsaber, in honor of the brand-name camera whose parts were used to construct the hilt that was seen in A New Hope.

This particular lightsaber does have a few notable characteristics that separate it from others of its type, like a distinctive hilt and an adjustable blade, but it’s chiefly famed for its unique history. What follows is a brief overview of the twisty path that Anakin’s lightsaber has taken over the years as it has passed from one owner to the next.

The lightsaber was created by Anakin Skywalker for his personal use during the Clone Wars. It was intended as a replacement for the first lightsaber he made, which was unceremoniously destroyed in battle on Geonosis. Because Anakin was allied with the Jedi Order at the time, the lightsaber had a blue blade. He wielded this lightsaber when he defeated and executed Count Dooku in a duel at the Battle of Coruscant.

Anakin remained in possession of his blue lightsaber even after he went over to the dark side and made the transformation into the dreaded Darth Vader. However, Vader lost the lightsaber—and nearly his life—when he was basically hacked to pieces by Obi-Wan Kenobi at the Duel on Mustafar. In the aftermath of that battle, Kenobi took possession of the lightsaber.

Kenobi held onto Anakin’s lightsaber for many years before presenting it to Luke Skywalker (“Your father wanted you to have this when you were old enough… the weapon of a Jedi Knight”) and teaching him a few things he needed to know about Darth Vader and the history of the Jedi cause. It became Luke’s trusted lightsaber during his days as Kenobi’s apprentice and, later, as he underwent advanced training under Jedi Master Yoda on Dagobah.

While fighting for the Rebel cause, Luke traveled to Cloud City, where he faced off against Darth Vader, his father’s alleged killer. Luke’s right hand, gripping the lightsaber, was severed by Vader during the subsequent duel. Both hand and saber tumbled into the air shaft below. Refusing to go over to the dark side with Vader—who shockingly revealed himself as Luke’s true father—the Jedi Knight barely managed to escape with his life, having lost an appendage, his lightsaber, and his illusions about his parentage.

Decades following the events on Cloud City, the lightsaber mysteriously ended up in the care of Maz Kanata on the planet Takodana. While going through Kanata’s stuff, Rey found the hilt and was instantly beset by alarming visions. “It calls to you,” Kanata explained to the upset Rey. Despite this invitation, the scavenger refused to take possession of the lightsaber. Finn took it instead. He later deployed it unsuccessfully against Kylo Ren—but Rey managed to use the Force to assume command of the fabled saber. She then proceeded to trounce Kylo Ren in a duel.

After tracking down the legendary Luke Skywalker, Rey attempted to give him back his old saber, only to watch as the old Jedi Knight literally discarded it, seemingly indifferent. Rey reclaimed the lightsaber. During a subsequent encounter with Ren, Rey’s lightsaber was inadvertently broken to pieces as the two enemies, in a tug-of-war battle, each attempted simultaneously to draw it to themselves by using the Force.

Will this legendary lightsaber rise again? Time will tell. Meanwhile, Star Wars aficionados can explore the finest lightsabers in the galaxy, including the Graflex models, in UltraSabers’ huge inventory of products. Feel free to contact UltraSabers with your questions and concerns.