Battle-Ready Lightsabers to Strike Down Your Opponents

There’s nothing quite like an epic lightsaber duel. Since witnessing Obi-Wan Kenobi clash with Darth Vader in 1977 (or whenever you were introduced to Star Wars), lightsaber combat has been the dream of every young Padawan. While nearly every Jedi Apprentice has grabbed a stick or a toy for pseudo-duels, authentic battle-ready lightsabers have changed the landscape, allowing wielders to engage in actual combat, from light sparring to full-on competitions. Read on to find out why you might want to add a battle-ready lightsaber to your arsenal — or even grow a General Grievous-style collection.

Combat-ready lightsabers are lightyears ahead of traditional sabers and the various Star Wars toys found in toy stores and department stores. A custom battle lightsaber is not just a toy, and it’s more than a collector item. While some saber aficionados just want commemorative or visually appealing weapons, many want to engage in actual lightsaber combat — and you can only do that with true battle-ready lightsabers.

A Brief History of the Battle-Ready Lightsaber

Star Wars lightsaber toys have been on the market since 1978. The earliest model was basically a flashlight with an inflatable blade attached to it. For amateur Jedi who used these for playful lightsaber combat, this often meant springing a leak in the blade itself — the Force wasn’t exactly strong with these sabers. Throughout the 80s and 90s, the technology expanded to include all-plastic parts and authentic movie sounds. But enthusiasts still wanted a more durable lightsaber. The 2000s led to a wide variety of lightsabers hitting the market, eventually leading to the Force FX lightsabers from Master Replicas and Hasbro, which had a metal (or sturdy plastic) lightsaber hilt, an LED-lit blade and motion-sensitive sound effects.

These lightsabers led to fans getting much more serious about posing and practicing their Obi-Ani spins because they looked gorgeously screen-accurate, but they still weren’t combat-ready. The blades weren’t made to sustain impact, and the LEDs therein were prone to breaking. Enter: custom battle-ready lightsabers from companies like UltraSabers.

Whether you side with the Dark Side or the Light, saber parts need to be made of durable and high-quality materials to withstand the force of a lightsaber duel. Additionally, a combat lightsaber must be constructed in such a way that the electronic parts in the blade and lightsaber hilt aren’t easily harmed. Plus, building your own lightsaber allows you to choose components that are appropriate for the type of dueling you intend to do.

What Can You Do with Battle-Ready Lightsabers?

With a proper combat-ready lightsaber by your side, you can engage in various types of authentic duels. Lightsaber combat is similar to martial arts — it’s mostly an artistic expression rooted in the Jedi tradition. Some people choose to use battle-ready lightsabers for simple, friendly sparring, while others engage in full-contact duels akin to fencing. Whatever path you take, you’ll have to develop your own lightsaber fighting style, and you can even base it on various Jedi and Sith styles that exist in Star Wars canon (or Legends), such as:

Any style of lightsaber combat requires training, patience and discipline on a level that would make Master Yoda proud. Combat lightsabers aren’t intended to harm anyone, but serious practitioners of the art will certainly put their weapons through the wringer. 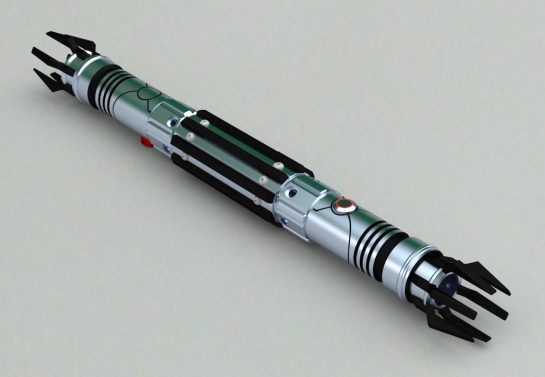 Every custom lightsaber UltraSabers produces is combat-ready. They’re all constructed with attention to detail and high-end materials that can stand up to all forms of lightsaber combat. Serious wielders who plan to take part in full-contact duels can choose a Heavy Grade blade to ensure maximum durability. Our battle-ready lightsabers are made with all aircraft aluminum and polycarbonate blades — with light sources built into the lightsaber hilt so they won’t malfunction due to sparring.

Get the Best Combat Lightsabers at Ultrasabers

Check out the custom battle-ready lightsabers available now at UltraSabers. We have the best hilt designs on the market, from totally unique styles to those based on your favorite Jedi Knights and Sith Lords. You might already be a Master of Teräs Käsi, but become a master of lightsaber combat with UltraSabers today!