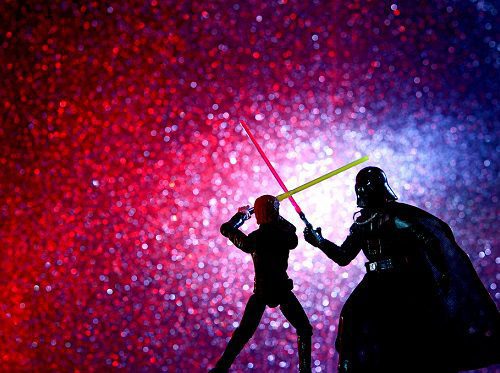 Every Jedi and Sith in the galaxy must be skilled in lightsaber combat to survive.  Although the Jedi are known to rely on peaceful negotiations, that does not mean they do not understand the importance of lightsaber combat. Within The Saber Legion, every form of lightsaber combat is recognized, but as fighting techniques have evolved, some methods of combat have become outdated.

The Way of the Saber: 7 Forms of Lightsaber Combat

When learning lightsaber techniques, a Jedi or Sith apprentice is trained to recognize all seven forms of combat. Shii-Cho, also known as Form I, is the oldest and most elementary form of lightsaber combat developed by the Jedi Order. Shii-Cho is still taught to youngling Jedis because it is the most basic. This style is known to be used when all other forms of combat have failed. Because this form has such early origins, Shii-Cho is not optimized for a lightsaber to lightsaber combat and is used predominantly for defense.

Once the Dark Jedi and Sith Lords emerged, Form I became outdated and the Jedi needed a combative form that was both offensive and defense, something more equipped for a lightsaber to lightsaber contact. At this point, many switched to the Makashi form, also known as Form II or the Contention Form. This form is both graceful and calculated, relying on balance and complicated footwork to outsmart their opponent. In the Makashi form, opponents use only one hand and with this form, the user is usually able to disarm their opponent without killing them.

As intergalactic combat changed and blasters became more relevant, the Makashi form of fighting soon became obsolete. Unlike Shii-Cho, which is still used by Jedi, Form III, also known as Soresu or the Way of the Mynock, replaced Makashi (Form II). This form is known to be the most resilient and the ultimate expression of the non-aggressive Jedi philosophy. Obi-Wan Kenobi, a master of Soresu, was said to be able to block any strike and able to move less than 20 hits per second.  Another key reason why this method became so prominent was for its defensive tactics. A Jedi needs to be able to protect themselves from all sides, and Soresu is the perfect tactic to not only combat in a duel but to deflect any potential shots coming at the fighter. Although many Jedi fighters use Soresu, Luke Skywalker proved himself excellent at this technique while fending off Scout Troopers on Endor.

As lightsaber wielders started becoming more skilled and powerful in the force, Form IV, also known as Ataru or the Aggression Form, grew in prominence. Ataru fighting techniques date back through the Old Republic and even were employed during the Mandalorian Wars. Due to its aggressive nature, Ataru became the favored combat style for many Sith and is marked as the second most kinetically active combat form, aside from Form VII. Much of the Ataru style is affected by how skilled the fighter is with the force seeing as it heavily relies on the use of Force-assisted acrobatics. Like Makashi (Form II), Ataru is most useful in one-on-one lightsaber combat. Relying on a compilation of speed, agility, and strength, practitioners of this form are combatting on the offensive.  Before the fall of the Old Republic, both Yoda and Qui-Gon Jinn were some of the most skilled Jedi in using Form IV. In Revenge of the Sith, Yoda displays his excellence in using the Ataru combatting style while fighting Darth Sidious. Ataru is not a fighting method that can or should be used by novices of the Force. It is a lightsaber tactic that requires detailed force knowledge and can only be employed by those who can become one with the force, allowing the Force to flow through them freely.

When observing Form V of lightsaber combat, a good opponent will be able to recognize the two principal disciplines of Shien and Djem So. Form V evolved from Form III as a method to not only defend oneself but also give the fighter an opportunity to be on the offensive. Shien, the classical variant of Form V, is mainly used in combat that takes place at a distance, like deflecting shots from a blaster. On the other hand, Djem So was specially designed for a lightsaber to lightsaber combat. The underlying factor in both Shien and Djem So is to use your opponent’s attacks against them in a counter-strike. Like many lightsaber forms, this one is used by both Sith and Jedi alike although some Jedi felt that the aggression used in this form was not faithful to the Jedi way.  Many large lightsaber-wielding individuals prefer to use Form V because it relies less on acrobatics than some of the other offensive forms.

Form VI, also referred to as Niman or the Way of the Rancor, was developed in order to combine many of the previous forms into one, centralized fighting technique.  In merging the previous forms, Form VI became the first form that did not have a signature fighting technique, but also the first form that did not have a particular weakness. Because of the lack of specialization to this method, when training in the Niman form, lightsaber-wielders usually accompany this form of combat with force-based combat.

Finally, the seventh form of lightsaber combat emerged and was referred to as either Juyo or Vaapad or Form VII. Form VII is the last known form of lightsaber combat and is known to be the most aggressive. Jedi Master Mace windu is the main Jedi known to use this form of combat because Form VII is the most aggressive and only the most Force-sensitive individuals can execute this form successfully. When Master Windu fought Darth Sidious, he used Form VII and took the upper hand in the fight. Once Master Windu disarmed Sidious, he was given the opportunity to take out this powerful Sith but knew it was not the Jedi way to murder an unarmed fighter. Master Windu’s immense force knowledge and lightsaber skills allowed him to disarm the most dangerous man in the galaxy. It was not Windu’s fighting skills, but devotion to honor the Jedi Way that led him to his death.

In general, all lightsaber fighting styles will partially overlap with another form. Each lightsaber combat form has its own distinct look but many times, several forms of procedure will be used in a given duel or fight. When deciding which form of combat to use against your opponent, you must evaluate many things. Many Jedi Knights are trained to fight on the defensive, so they do not take any life unnecessarily so when a Jedi determines his or her method of battle, he or she will usually take into consideration how to be the most efficient with the least loss of life. When a Sith or Dark Jedi chooses a combat style, he or she will usually be looking for the lightsaber formthat  most effective against their given opponent.

It is widely thought that the only thing that can block a lightsaber blade is another lightsaber blade. This is false. There are many materials that are impervious to a lightsaber beam.  Water, for instance, is a substance that lightsabers are unable to function in if immersed. The beam will begin to sizzle, and the utility will be severed. Another resistant material is ultrachrome. This material could block blasters, projectile weapons, and lightsaber blades by diffusing the energy across its surface. An additional restraint material is Cortosis. This is by far the most common restraint and has the ability to short and deflect lightsaber blades. Avoid these substances at all costs, or your lightsaber and performance will suffer.

While in combat, it’s often difficult to remember simple strategies to use to improve the outcome of the battle. Use these techniques to help you embody true Jedi qualities.

When joining groups like the Saber Legion and other worldwide lightsaber combat groups, certain protocols must be followed to ensure the safety of everyone in the group. Just as Jedi younglings begin to learn the art of the lightsaber in the Shii-Cho form, the Saber Legion requires mastering the Shii-Cho form before engaging in more elaborate forms of combat. Beginning with Shii-Cho is not only the safest way for beginners to test out their lightsaber abilities but it is the most authentic way to train in the art of lightsaber combat. The Saber Legion has remote training clans throughout the world that allow individuals to duel in a safe space with other like-minded, Star Wars enthusiasts.

In order to practice the safest lightsaber fighting styles, follow the S.A.B.E.R.S acronym.

S is for safety. Always ensure your saber is secure before forgoing a fight. Check for loose blades, grips, and straps.

A stands for awareness. Get to know your surrounding area and become aware of objects that can obscure your fight. There’s nothing worse than accidentally hitting an unseen item and damaging your blade.

B is for batteries. Keep a new supply of batteries with you anytime you leave for a battle or convention. You wouldn’t want a lightless saber!

R is for restraint. Don’t aimlessly swing your saber around uncontrollably. Additionally, random dueling can result in injury. Know how much your saber can withhold and act accordingly.

S stands for share. Share the experience of owning a lightsaber and the happiness it brings to you and those around you. Inspire people to wield the lightsaber force.

Battle with a Combat-Ready Lightsaber from UltraSabers

Many individuals within the Saber Legion chose to fight with the most authentic, durable, and custom designed lightsabers that are currently on the market from UltraSabers. Although there are infinite ways to customize your UltraSabers, there is one thing that all UltraSabers have in common, and that’s quality. Some of the sabers you’ll find at UltraSabers.com may look familiar, as many of their designs closely mimic those you’ve seen in the Star Wars movies. Their products have been battle tested and combat artist approved time and time again.

To get the most out of your next lightsaber duel, practice the seven forms of lightsaber combat and choose a fighting style that you are best at. Remember to also practice the S-A-B-E-R-S safety techniques to ensure a safe battle. Invest in a quality lightsaber, like Ultra Sabers, that won’t break mid-fight and cost you your life. Then, learn your combat style, find some other awesome Star Wars enthusiasts through websites like the Saber Legion, and schedule a duel to see who is strongest with the force!

And may the force be with you, always!