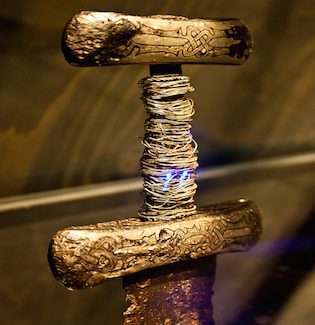 What is a Lightsaber Pommel?

The Pommel of a saber is the bottom most piece of the weapon when held upright. Functionally in our time and world, the Pommel is forged into swords and daggers as a counterbalance for the weapon.

Originally, a pommel was forged into a sword’s hilt to stop the wielder from dropping it or allowing it to slide out of their hands as it was being swung about primitively. Starting in the 11th century (Earth time), the potential for the tactical application of the pommel was realized, and smiths began to add them on swords and other various bladed weapons with a bit more science and physics in mind; although they probably did not realize it as such.

As time moved forward and a smith’s craft was honed, the pommel became an effective counterbalance to the often heavy blades that they were attached to. It was quickly discovered that the addition of a balancing factor to a sword allowed its wielder to swing and strike much more effectively, giving a distinct advantage in battle.

Turning our attention to the hilt of our favorite weapon from a galaxy far far away, we can see that a pommel is a must-have across the board in Jedi and Sith saber design, but it brings us to an interesting quandary. The blade of a lightsaber is.. well, light, being emitted from a concentration of pure plasma energy and held in place by an electromagnetic field, making it truly weightless. So what then, is the practical application of the saber’s pommel if there is no weight in need of balancing?

The pommel of a lightsaber is crafted from a single piece of durable metal, giving it the expected heft of such a feature, but since the entirety of the saber’s weight came from its hilt, it did not functionally add to the graceful swings of the weapon.

While the pommel served a functional purpose in the function of the saber itself, acting as a housing for a backup energy source or competing many of the dozens of necessary circuits, many fighters would slip the use of the pommel as a blunt, non-lethal weapon into their combat styles, in an attempt to needlessly take a life during less severe fights.

The appearance of the pommel during the saber’s construction would essentially come down to the choices of its master, be they aesthetic or functional. Often times, the apprentice would craft their saber to closely resemble their master’s as a sign of respect.

A Jedi Knight, sworn to defend those who cannot defend themselves would seldom draw their blades outside of battle. Much of their conflict could be resolved with a simple mind trick on a weaker willed adversary. Their sabers were effective for combat, but drew much of their inspiration from the lightsaber’s initial use as a ceremonial instrument. Pommels would be more streamlined and elegant, completing the look of a saber as a whole, with no real draw of attention.

A Sith lord, fueled by anger and easily turned aggressor in many a situation, may often decorate their pommels more ornately, featuring spikes, claws, or a heavier, weighted cap, giving their saber a look as aggressive as its wielder. Many of the sabers seen in movies showed us Sith lords with once-Jedi masters, perhaps this influenced the craftsmanship of their weapon and giving their sabers a flair of elegance amidst their aggressive and scarred Sith tradition?

At Ultrasabers, we’ve crafted sabers that have drawn inspiration from the craftsmanship of both the Jedi and Sith through the years. Because every piece of our sabers is MHS compatible, many fans will purchase several sabers and combine them into a weapon that truly embodies their destiny.

Our most popular Sith style pommel is the spiked aggressor coming from the Scorpion. The pommel brings a weight to the hilt that balances the swing of your Ultrasaber, and a real back-up weapon to the fight.

As for the wielders of the light side of the force, a strikingly similar pommel is found at the base of the noble Guardian. Similarly to the malicious spikes of the Scorpion, the Guardian’s pommel brings the more elegant, squared turreted design to the battlefield, and provides a similar balance to the saber while in combat.