Played by the incomparable Christopher Lee on film (and voiced by Corey Burton in The Clone Wars series), few characters bring as much class and regality to Star Wars as Count Dooku. Lightsaber aside, Dooku possesses a poise, confidence, elegance and dry wit that set him apart from other Sith. Count Dooku’s lightsaber is the natural extension of his personality — unique yet timelessly classic.

Dooku was a politician, the Count of Serenno, his home planet. Once a Jedi Master, he lost faith in the Order and the Senate of the Galactic Republic. He later became the leader of the Confederacy of Independent Systems — and succeeded Darth Maul as the apprentice of Darth Sidious. Adopting the name Darth Tyranus, lightsaber glowing red, he was instrumental in the machinations of the Clone Wars. Let’s look at the background of the iconic lightsaber Count Dooku wields in Star Wars lore.

Little is known about the first lightsaber Count Dooku used, as he built his unique curved hilt by the time he was about 15 years old, just before he was selected to be Yoda’s Padawan. He kept this lightsaber for the rest of his life, using it as a Jedi Master when he took Qui-Gon Jinn as his apprentice all the way to his time as a Dark Lord of the Sith.

Count Dooku’s lightsaber skills were nearly unmatched when he was a Jedi, and he relished the praise and admiration he received. However, this was a point in time when the lightsaber was largely considered a ceremonial weapon for the Jedi — a time of peace with little combat. The Jedi used their lightsabers for de-escalation and mock duels for Republic citizens, but Dooku felt this wasn’t enough.

Having been exposed to the dark side, Dooku became obsessed with the belief that the Sith were hiding in secret, though most Jedi believed them to be extinct. Following this belief, he dedicated himself to the art of lightsaber dueling. The rest of the Jedi Order, Grand Master Yoda in particular, did not support this pursuit. Dooku’s lightsaber prowess increased along with his dedication to the cause, and his lightsaber hilt and form reflected this.

Feeling the Jedi to be arrogant, complacent pawns of the Senate, he left the Order — one of the few Jedi Masters to do so at that point in history. This set him on the path to the dark side, joining the Sith despite his previous fear of their threat to the Republic. The canon audiobook Dooku: Jedi Lost reveals much of this backstory, and the Tales of the Jedi animated series will tell more stories from Dooku’s time as a Jedi.

As a Sith Lord, despite adhering to the Rule of Two, he trained several apprentices, including Asajj Ventress, Savage Opress and General Grievous, to whom he taught the art of lightsaber combat.

What Color Was Count Dooku’s Lightsaber When He Was a Jedi?

Count Dooku’s lightsaber color was blue when he was a Jedi. Interestingly, both his master, Yoda, and his apprentice, Qui-Gon Jinn, wielded green lightsabers — a visual cue that Dooku was out of step with those around him even before he turned to the dark side.

How Did Dooku’s Lightsaber Change When He Joined the Sith?

While he switched to a red kyber crystal when he joined the Sith, Count Dooku’s lightsaber hilt did not change. He continued to use his signature curved hilt for the rest of his life — it just became a red lightsaber like all those carried by Sith. 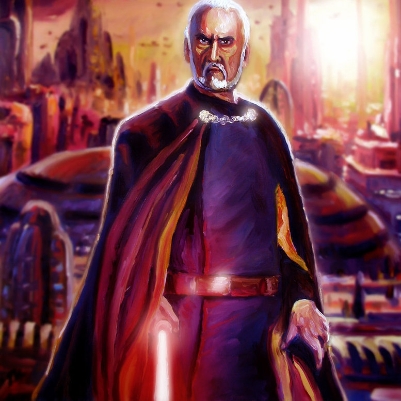 Who Did Count Dooku Duel With In the Star Wars Films?

In Episode II – Attack of the Clones, Count Dooku duels with Anakin Skywalker and Obi-Wan Kenobi. Dooku’s lightsaber skills are clearly superior, as he wounds Obi-Wan and cuts off Anakin’s right arm. However, Yoda comes to their aid before Dooku can strike a killing blow, leading to a Force battle and lightsaber duel between Dooku and his former master. Dooku distracts Yoda by pulling a pillar down on Obi-Wan and Anakin, giving him time to flee.

In Episode III – Revenge of the Sith, Dooku has a rematch with Obi-Wan and Anakin while holding Chancellor Palpatine (aka Darth Sidious) “captive” aboard the Invisible Hand. He bests Kenobi, but Skywalker overpowers him, slashing off his hands and taking Count Dooku’s lightsaber.

What Happened to Dooku’s Lightsaber?

After cutting off his hands, Anakin holds Dooku’s lightsaber and his own across the Count’s throat. Palpatine, sitting nearby, goads Anakin into killing Dooku. While Count Dooku seems shocked by his master’s betrayal, he stays quiet, accepting his fate. Anakin hesitates because his opponent is unarmed, but Palpatine pushes, hoping to stoke the flames of hatred in Anakin and make him his next apprentice. Anakin uses the two lightsabers to cut off Dooku’s head.

What Did Anakin Do With Dooku’s Lightsaber?

It seems that Anakin left Dooku’s lightsaber with his body after beheading him, letting it burn with the Invisible Hand.

Count Dooku’s lightsaber hilt has a unique curved design, giving an air of both sophistication and aggression. It’s about 35.5 centimeters long, made of alloy metal and adorned with black accents and a red ignitor. When Dooku built this hilt, it was considered anachronistic — he was deeply interested in Jedi history, and curved hilts were common for ancient Jedi who regularly engaged in duels with the Sith. The curve allows the wielder to use unorthodox angles of attack by manipulating the blade with a single hand.

For the Star Wars Art Department, Count Dooku’s lightsaber was based on old-style swords and knives, particularly the traditional Filipino barong. It also references actor Christopher Lee’s status as an accomplished fencer.

Why Is Count Dooku’s Lightsaber Curved?

The curve of Count Dooku’s lightsaber represents his elegance and his interest in tradition and history. It also supports the lightsaber form he uses, which focuses on the single-handed use of a single-bladed lightsaber (more on that below).

How Does Count Dooku Hold His Lightsaber?

While it may look strange compared to other lightsaber hilts, the curve of Dooku’s lightsaber gives him more control with a single hand — and more ability to throw off an opponent. The curve below the emitter leaves the blade at a strange angle in relation to his hand, making every strike hard to predict. The hilt’s elbow serves as a counterweight for balance, and the angled pommel works as a leverage point for the off-hand.

What Lightsaber Form Does Count Dooku Use?

Count Dooku uses Form II: Makashi, and he is a master of the form. Makashi emphasizes elegant precision, with clean strikes that are quick and controlled while conserving energy. Rather than powerful, fatal blows, Makashi aims to disarm the opponent. While it can be used to deflect blaster strikes, Makashi was specifically intended to counter other lightsabers.

Yoda hated Count Dooku’s lightsaber because the curved hilt he crafted as a Jedi was a duelist’s weapon designed to off-balance other lightsaber wielders — at a time in history when most Jedi believed the Sith to be extinct. As such, it only gave him an advantage over other Jedi. Combine this with his dedication to Makashi, a lightsaber form dedicated to defeating an opponent in lightsaber combat, and it was cause for concern for Yoda. Dooku believed that the Sith were still operating in secret and that the Jedi should be prepared for their threat. Yoda disagreed, so it seemed as though Dooku only had a desire to defeat other Jedi and prove himself, which the Order frowned upon.

Yoda’s concern for Dooku’s obsession with combat, and with a cause that most Jedi believed to be futile, is the reason he took Dooku as his Padawan — something he hadn’t done for over a century. It was unusual for a member of the Jedi Council, especially the Grand Master, to take an apprentice. While Yoda condemned Dooku for what he viewed as irrational fears, he recognized the young Jedi’s potential. The lightsaber Dooku carried was a constant reminder of his and Yoda’s disagreement.

Master Yoda felt that Count Dooku’s lightsaber hilt reinforced his desire for confrontation. While he did not foster his ideals or his desire to wipe out the Sith, he did not explicitly forbid Dooku from studying ancient Jedi history or perfecting his form. However, he grew to fear that Dooku would eventually turn his lightsaber on another Jedi.

Time proved Dooku to be right in his belief, and the fact that the Jedi refused to hear him out drove him down a path to the dark side — and to joining the Sith that he once feared. Yoda was only right that Dooku’s lightsaber would be used against the Jedi.

“It is obvious that this contest cannot be decided by our knowledge of the Force…but by our skills with a lightsaber.” —Count Dooku

Light Your Own Path With a Custom Lightsaber

Whether you want a classy, sophisticated lightsaber like Count Dooku, a hilt that’s more aggressive and menacing, or anything in between, you’ll find it here. You can build a custom lightsaber with a variety of options, choosing the blade, hilt, electronic components and more. Our lightsabers are collectible, battle-ready and perfect for cosplay. Create yours today!

Which Star Wars Characters Wield a Red Saber? With so many lightsaber colors in the Star Wars universe, it can be difficult to recount which character wields which saber. In this series of articles, we will be discussing…
What Is the Meaning of the Red Lightsaber? Red Lightsabers are notorious in Star Wars as a weapon carried by the most villainous of characters, the Sith. These villains had but one purpose in life, to eliminate the Jedi Order and gain control…
Three Most Recognizable Single Blade Sabers To build your own lightsaber is a highly personal process that expresses and complements the individual’s deepest values, including the nature of their connection to the Force…