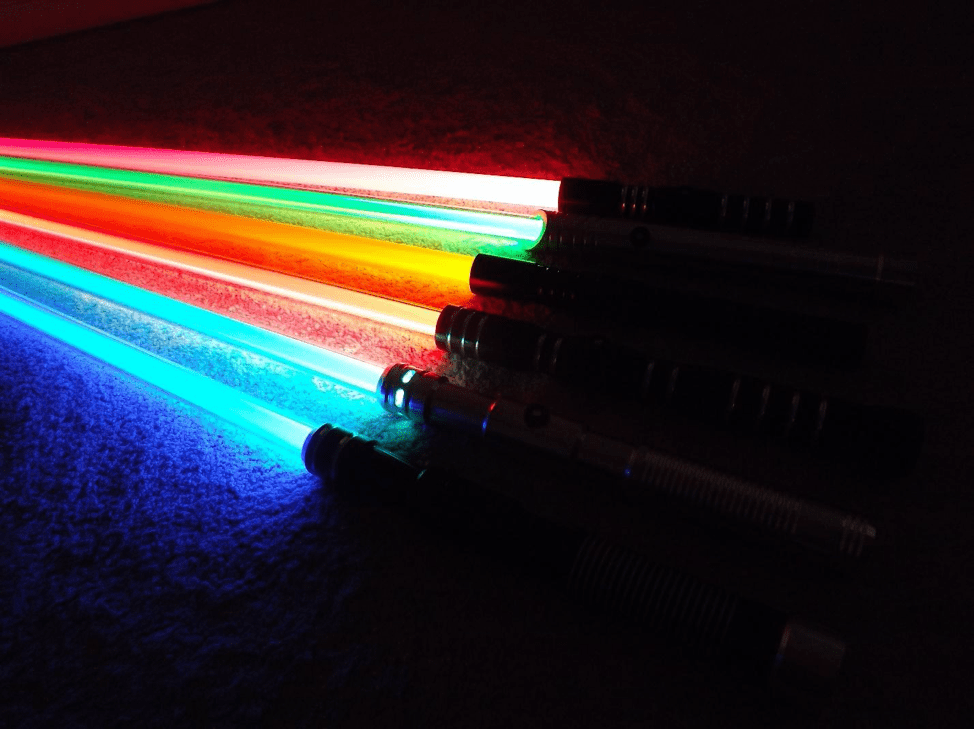 At first glance, the lightsaber seems like a fairly simple piece of equipment. You have a handle where your hand goes. The handle is situated at one end of a blade-like protrusion that is used to strike your opponent. As novice fans soon learn, however, the lightsaber is more complicated than that—and here’s where a lot of beginners get confused.

Lightsabers typically come with a variety of components and doodads whose function can’t be easily inferred from their name. What does an “emitter” actually emit, anyway? And isn’t a “pommel” supposed to be the object that Olympic gymnasts dance on? To help novices, here’s a brief guide to the various lightsaber parts and their functions.

Hilt – The hilt, or body, is the handle of the lightsaber. It’s the part you hold while you’re swinging the lightsaber around. Lightsaber Hilts come in a wide range of styles; typical features include a choke point (the narrowest part of the hilt) and a switch (to turn the blade on and off). Finding the right hilt is largely a matter of personal aesthetics, plus a few practical considerations like the size of the user’s hands. Ultrasabers hilts also house the soundboard and other electronic components.

Blade – This is the narrow, illuminated cylinder that is used for striking objects or opponents. Ultrasabers blades, which come in various lengths, are made from sturdy polycarbonate tubing that has film inside to augment illumination. Midgrade (best for displaying bright colors) and Heavy Grade (best for sparring) blade variations are available.

Emitter – Connected to the end of the hilt, the emitter helps to stabilize the blade by tightly clutching it at the spot where it attaches to the body. Some lightsaber emitters have windows, which are precisely cut gaps that allow the light of the blade to shine through. Other optional emitter features include claws and blades. These emitter options are primarily aesthetic in nature, and may be unsuitable for those who are into lightsaber fights, especially at the competitive level.

Pommel – This is the knob-like “cap” at the bottom of the hilt (that is, the end opposite of the one where the emitter attaches). It is largely decorative in nature, although it can play a role in balancing the weight of the lightsaber and preventing the user’s hand from sliding off the end of the hilt during combat. Many lightsaber pommels include vents that permit the audio effects from the soundboard to be heard more clearly.

Coupler – This small cylindrical part has an opening at each end for joining two lightsaber hilts together. When the hilts are connected in this fashion, it creates what is known in the Star Wars universe as a double-bladed lightsaber (or staff), the preferred weapon of Darth Maul and certain other notables. The “quick-release” coupler is special variation that has been engineered to enable the user to connect or disconnect the joined lightsabers in just a few moments. The coupler is necessary only for the double-blade lightsaber.

Ultrasabers also carries a selection of lightsaber accessories (color discs, USB cords, Covertec wheels, and more) to help customers get the most out of their purchase. Feel free to contact Ultrasabers with any questions about the products listed on this site.

Lightsaber Accessories You Should Definitely Consider

Apart from intense enthusiasm, collectors of all kinds have one common characteristic: they tend to accumulate a lot of stuff relating to their hobby. Nobody ever stopped at collecting one Blu-Ray, one baseball card, one video game, or one car. If you’re really into a certain pastime, it’s only natural to cast a wide net, […]