Despite only fully appearing in one movie, Episode I – The Phantom Menace, Qui-Gon Jinn is very important to the overall story of Star Wars. Qui-Gon Jinn, lightsaber at his side, discovers Anakin Skywalker — and encourages his Padawan, Obi-Wan Kenobi, to train him as a Jedi. Qui-Gon strongly believed in Anakin as the chosen one who would “restore balance to the Force.” He may have been right, but not in the way he expected.

Qui-Gon Jinn’s lightsaber skills were considerable, his form as elegantly utilitarian as his hilt design. A wise warrior who followed only the path he set for himself, Qui-Gon stands out as a true original among the Jedi Order. Let’s dive into the facts about Qui-Gon’s lightsaber and some canonical history of this well-respected Jedi.

Known as a maverick among the Jedi, Qui-Gon was known to follow his own will over the strict rules and teachings of the Jedi Order. This fact often brought him into conflict with Obi-Wan Kenobi, his apprentice, as detailed in the canon novel Master & Apprentice.

Qui-Gon was also known to be deeply interested in ancient Jedi prophecies and finding “balance” in the Force, which is why he clashed with the often rigid views of the Jedi Council and even questioned whether he could learn something from the dark side. These factors led some to refer to him as a gray Jedi and impacted his belief in Anakin Skywalker as the chosen one.

We see Qui-Gon meet Anakin in The Phantom Menace, along with his participation in the Battle of Naboo, a precursor to The Clone Wars. This is also when Qui-Gon and Obi-Wan clash with the Sith Lord Darth Maul. As far as we know, in current canon, Qui-Gon Jinn’s lightsaber remained the same throughout his experiences. He believed that the lightsaber represented the image the Jedi should portray — which was not about physical power or intimidation.

Count Dooku, at the time a Jedi Master, trained Qui-Gon Jinn. Dooku, who himself was taught by Master Yoda, eventually fell to the dark side, later taunting Obi-Wan with the fact that he trained his master. The Tales of the Jedi animated series is set to explore the relationship between Qui-Gon and Dooku in more depth.

Darth Maul killed Qui-Gon Jinn. While Qui-Gon and Obi-Wan are able to take on Darth Maul (and his double-bladed lightsaber) together, the Sith Lord separates the two of them and kills Qui-Gon. Charging in to avenge his master, Obi-Wan eventually uses Qui-Gon’s lightsaber to defeat Darth Maul, cutting him in half. With his last breath, Qui-Gon makes Obi-Wan promise to train Anakin.

Qui-Gon Jinn’s lightsaber hilt is elegantly simple and basic — a strong contrast to that of his master, Dooku, who wields a rather ornate lightsaber after he turns to the dark side and switches to a red blade. The hilt has a black ridged handgrip made of alloy and holds micro-power cells that allow him to control the current charge. Obi-Wan’s first lightsaber had a similar hilt design inspired by Qui-Gon. 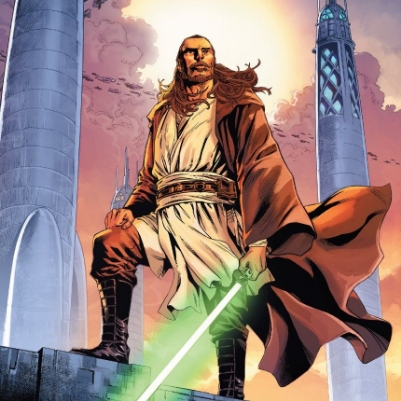 What Color Was Qui-Gon Jinn’s Lightsaber?

Qui-Gon Jinn’s lightsaber color is green. While some Jedi have used various colors, like switching from a blue to a green blade or vice versa, Qui-Gon’s lightsaber always held a green kyber crystal.

Why Does Qui-Gon Jinn Have a Green Lightsaber?

Like many other wielders of green lightsabers, including Yoda and Luke Skywalker, Qui-Gon’s green blade represents his status as a wise and peaceful protector who is in tune with the spiritual side of the Force. Qui-Gon, in particular, is the kind of “warrior monk” often associated with the green lightsaber color.

What Happened to Qui-Gon Jinn’s Lightsaber?

After the duel with Darth Maul during the Battle of Naboo, Obi-Wan returns Qui-Gon Jinn’s lightsaber to the Jedi Temple. While this isn’t depicted on screen, it’s described in the reference book Star Wars Lightsabers: A Guide to Weapons of the Force written by Star Wars Lore Advisor Pablo Hidalgo.

What Lightsaber Form Does Qui-Gon Jinn Use?

Qui-Gon Jinn’s lightsaber form is Ataru. Also called “Aggression Form,” Ataru Form is known for being more offensive than defensive, making it quite dynamic to look at. With fast lightsaber strikes and acrobatic moves aided by the Force, Ataru is meant to overwhelm a single opponent quickly.

Master Your Skills Like Qui-Gon Jinn — Your Lightsaber Awaits

We have the custom lightsaber you need to forge your own path in the Force. For cosplay, display and authentic duels, we have an incredible selection of lightsaber designs with customizable hilts, electronics and more. From the basic to the ornate, you’ll find it all right here.

What Is a Gray Jedi? The term Gray Jedi has historically held dual meanings. The first and most common use of Gray Jedi was employed by both the members of the Sith, as well as the Jedi Order, to describe Force-users who did not firmly align with either the Jedi or Sith teachings and beliefs….
Which Star Wars Characters Use Green Sabers? With so many lightsaber colors in the Star Wars universe, it can be difficult to recount which character wields which saber. In this series of articles, we will be discussing…
What is the Meaning of the Green Lightsaber? Lightsabers have fascinated Star Wars fans across multiple generations. There are many different types of lightsabers, but they are generally a variation of one of the following colors…