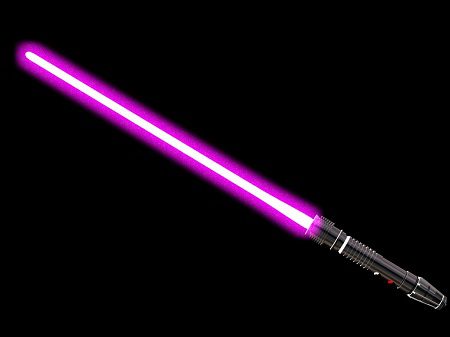 What is the Meaning of the Purple Lightsaber?

Purple lightsabers are among the most mysterious color lightsabers known in Star Wars.  They were carried far less often than their green, red, yellow, and blue counterparts. While the association of these other colors is widely known, the purple lightsaber has a far less concrete history or origins.

The color and hue of a lightsaber share a strong association with the identity of the wielder.  Purple is a blend of red and blue. In Star Wars, traditionally blue lightsabers were used by the Jedi, the heroes of the galaxy and red lightsabers were used by the Sith, the villains.  The shading purple speaks to moral uncertainty, reconstruction, and recovery. Therefore, the individuals that used a purple lightsaber generally shared an affinity with both the Light and Dark sides of the Force.  They demonstrate attributes such as instability, high-energy, and the relentless determination to accomplish and feat that they are subjected to. Additional attributes that are commonly seen in the wielders of purple lightsabers include that of isolation, sympathy, and compassion.  The lone wolves of the galaxy, these lightsaber wielders prefer to work alone and have been known to take extended bouts of mediation to discover their true purpose in life.

Duelists that engage their enemies with purple lightsabers have been known to have excellent foresight and anticipation, commonly approaching dangerous situations with forcefulness and meaningful strikes.  They are individuals that know their true self but are prone to their emotions and temper. Towing the delicate balance of patience and disarray, these warriors occasionally lose control. When it comes to battle, these duelists crave glory, and their level of excitement rises to an all-time high in the heat of the moment.  They embrace the wrath of war, and it is apparent in their movements during an engagement.

Regarding fighting style, purple lightsabers are best suited for individuals that move with quickly developing strikes, loaded with intense and adaptable moves.  They incorporate a high-level of gymnastics into their technique, including somersaults, flips, and various other leaping strikes. These duelists ascend on their foes with rapid, effective saber strokes from a wide variety of angles and ranges.  In addition to their hand-to-hand combat skills, these warriors fundamentally depend on their Force abilities to defeat their enemies. Force-adjusted swings of the lightsaber, Force-pushes, and Force-assisted lightsaber throws are commonplace in their battle repertoire.  The power contained within the purple crystals that power these lightsabers allows the Jedi to surpass their physical and mental boundaries to levels not seen with other color lightsabers. Thus, their style of lightsaber combat required a much more extensive level of mental concentration and usage of their emotions.  Although this was commonplace of purple lightsaber wielders, the calm on the outside gave no indication of the storm within.

Unlike other lightsaber crystals that were commonly found on the planet Ilum, among other regions of the galaxy, purple lightsabers were most notably found on the planet Hurikane. Purple lightsaber crystals were coveted for their scarcity and widely accepted magnificence and beauty. The most notorious purple lightsaber wielder acquired his crystal on Hurikane, a Jedi by the name of Mace Windu.  During his travels to the planet, Windu destroyed one of the native inhabitants during a grueling chase. Upon discovering that he had killed one of the indigenous species, he used his Force abilities to reconstruct the creature. After demonstrating his mercy, the species rewarded Windu with his very own purple lightsaber crystal, which was used in his weapon of choice for years to come. Windu’s lightsaber is a symbol of perseverance, determination, incredible mental strength, and kindheartedness.

There were very few other galactic warriors outside of Windu which wielded the purple lightsaber.  Quite possibly because it’s color is a mixture of both good and evil, most characters in Star Wars were too closely aligned with one or the other to carry a weapon of such brilliance and secrecy.  Those that did acquire such a crystal, were typically subjected to intense trials and tribulations in order to be deemed worthy of its use. Reserved for the strong, brave, and slightly unhinged, the purple lightsaber will continue to be a crystal forever shrouded in wonder.