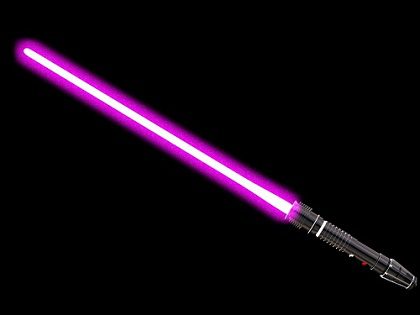 To understand the role that each saber plays we must first understand where the color originates from. Color comes from cyber crystals.  The crystal is at the core of the lightsaber and the color of the crystal determines the color of the saber. They are extremely rare and attuned to the Force.  The color emitted by each crystal is determined by the personality, fighting style, and force-alignment of the wielder. This article will focus on the mysterious purple lightsaber crystals.

Previously we touched on the fact that most purple lightsaber wielders seen in Star Wars shared an affinity with both sides of the Force.  This is further demonstrated in the personality of the wielder. These individuals are typically aggressive, bold, and daring, leading their comrades fearlessly into battle. These duelists are relentless in the pursuit of their goals, demonstrating a solid commitment to their values and radiating passion.  They have good morals, but their hostility can sometimes misguide their decision-making, leading them astray. The color purple is charismatic, and often times those that share an affinity to the lightsaber are drawn to one another.

The most iconic purple lightsaber in the Star Wars universe is unquestionably the one wielded by Jedi Champion, Master Mace Windu. As a youngling entering Jedi training, Windu could view shatter points in the Force.  These are a complex Force phenomenon, attained by a small number of individuals. Essentially, it allowed Windu to place immense focus and concentration on the fault lines of the Force, and perceive different possibilities and their result, providing him a glimpse into the future and the consequences of actions.

Building your own lightsaber was a rite of passage for a young Jedi Padawan.  The youngling would be sent to mine his own crystal, build it into a lightsaber, all the while meditating during the construction to augment the crystal and form a bond with the lightsaber.  Through Windu’s visions during shatter point exposure, he caught a glimpse of the lightsaber he was destined to build. Mace then brought this to the attention of the Jedi Council, which caused concern, as the purple lightsaber of his visions was thought to be impossible for Windu to build.  However, Mace was determined to build the lightsaber he had seen.

By the age of fourteen, Windu remained unwavering in his desire to construct his purple lightsaber and requested a challenge to obtain the materials necessary for the build.  After much deliberation, the Jedi Council decided that Mace would be sent to the planet Hurikane, alone. Hurikane was a planet located in Wild Space, and was inhabited by a species of sentient beings made of stone and purple Hurrikaine crystals, and resembled insectoids.  The Jedi Council instructed Mace Windu to travel to Hurikane, and negotiate with the unidentified Hurikane species and obtain the crystal required for the build.

Upon his arrival, Windu attempted to reason with the species to allow him a crystal but was ultimately chased away.  Running for his life, Mace used his Force abilities to dismantle his attacker. Realizing the error in his ways, Mace reconstructed the Hurikane inhabitant.  In a sign of gratitude for his mercy and good-heartedness, the newly reconstructed inhabitant presented Windu with a Hurrikane Crystal, which Windu then used to construct his lightsaber.

That lightsaber carried Windu throughout his life until Mace created the second lightsaber in recognition of his position as a senior Jedi Council member.  Now having the skill and knowledge Windu had lacked in his adolescence, he built the second lightsaber to the highest standards. Placing an emphasis on meticulousness and excellence, the lightsaber was constructed with an electrum finish reserved for the highest-ranking council members of the Jedi Order.  Naturally, this new lightsaber emitted the Windu’s signature purple color. This second lightsaber was used by Windu throughout the Clone Wars, until his untimely death while engaged in a battle with Darth Sidious as seen in Revenge of the Sith.

The kyber crystal is the most commonly used crystal when building a lightsaber.  Here, we will provide an overview of the unique abilities powerful purple lightsaber crystals have.