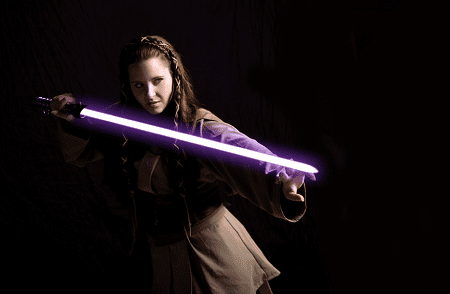 With so many lightsaber colors in the Star Wars universe, it can be difficult to recount which character wields which saber.  In this series of articles, we will be discussing three Star Wars warriors that carried purple lightsabers, their history, fighting style, skill set, and any rare abilities.

An’ya Kuro was a mysterious, Force-sensitive human that was a Master of the Jedi Order.  She was so dedicated to the force and the Jedi philosophy that she abandoned her name and took on the moniker, Dark Woman.  A list of her notable achievements includes:

Kuro was a powerful Jedi who had a reputation for her unorthodox, more brutal training regime.  Often, the Jedi High Council would assign her more difficult trainees to teach in the ways of the Force.  Kuro’s process typically produced Jedi with a touch of darkness, however, her harsh methods have been known to lead to failure.

Kuro’s final apprentice, Aurra Sing, was assigned to her master when the Jedi High Council noticed that Sing had demonstrated aggressive tendencies.  Eventually, Sing was turned against the Jedi and became a bounty hunter with the goal of eliminating the Order. Kuro, in shame, fled to Cophrigin V for 12 years of solitude during which she contemplated her role as a Jedi. Darth Vader located Kuro on the planet and killed her, at which time Kuro became a Force ghost.

An’ya Kuro fought with Form IV technique but was known for her Force abilities than her dueling skills.  She had the ability to control plant matter, bend light around her to render herself invisible, pass through objects, teleport, Force healing, and finally, to become a Force ghost.

Jaina Solo Fel was a Jedi Master of the new Jedi Order that also wielded a purple lightsaber. A list of her notable achievements includes:

Jaina and her twin brother were born to Leia Organa Solo.  Prior to their birth, three kidnapping attempts were made on Leia in an effort by Dark Jedi Joruus C’baoth to steal the children and mold them to carry out his evil bidding.  Luckily, these efforts were foiled, and Jaina developed Force abilities that eventually brought her to train as a Jedi following her tenure as a pilot.

Solo shared the Skywalker bloodline, and was strong in the force, demonstrating telekinetic and Force lightning abilities.  Additionally, Jania had strong mechanical skills, remarkable piloting abilities, and was a talented user of firearms.

Mace Windu rounds off our list of purple lightsaber wielders and is the most closely associated Star Wars character to this color saber.  A list of his notable achievements includes:

Windu was a Jedi champion and hero known for his fearlessness.  During the Clone Wars, he served the Republic as a tactician, military mind, politician, and warrior.  Windu was so powerful that he was able to defeat Darth Sidious, but was interrupted by Anakin Skywalker just before killing the evil Sith Lord.

Windu was a practitioner of Form VII, the most aggressive and unpredictable technique of lightsaber combat.  Although more prominent among dark side users, Mace Windu was able to successfully practice the technique without succumbing to the temptations of the dark side.  In addition to his offensive capabilities, Windu relied heavily on defensive techniques such as blocking incoming blaster fire from an overwhelming number of incoming enemies.

Windu’s Force abilities were superb.  He was proficient in various forms of telekinesis, levitation, mind control, enhancement of physical abilities through the use of the Force, and the ability to block a Force lightning attack with his lightsaber.  When deflecting the lightning, Windu developed the ability to redirect the lightning back to the source in a superconducting loop.