The lightsaber Darth Vader wields is one of the most menacingly iconic weapons in Star Wars. Darth Vader, with lightsaber in hand, is the ultimate image of Sith prowess, the red glow casting dark shadows as it glares off his helmet. We’re here to discuss Darth Vader’s lightsaber in detail, from its appearance to its history on screen.

Technically, the first lightsaber Darth Vader carries is the blue one he used as Anakin Skywalker in the Clone Wars — the one with which he slaughters younglings and duels his former master, Obi-Wan Kenobi, on Mustafar after his turn to the Dark Side in Episode III. The same saber that Obi-Wan takes and later gives to Luke Skywalker, which then ends up in Rey’s hands.

While that “elegant weapon” is undoubtedly important in Star Wars history, it’s not our focus here. We’re looking at Darth Vader’s lightsaber in all its Sith glory — the red one first seen in the original trilogy. Our focus is on the current canon, though the expanded universe Legends canon is fairly straightforward on this topic. Join us as we dive deep into the Holocron on Darth Vader’s lightsaber.

The original prop used as the Darth Vader lightsaber hilt in A New Hope (then just called Star Wars) was built from the flash tube of an MPP Microflash camera, later updated for Return of the Jedi with a Graflex tube like the one used for Luke’s first lightsaber (aka Anakin’s).

The similarity between the two is no coincidence. In Star Wars lore, Darth Vader’s lightsaber hilt intentionally resembles the one he used as Anakin, including its:

That said, Vader’s red saber has more black detailing and two kyber crystals for enhanced control of the blade’s length. There’s a practical element to this — having a similar hilt gives Vader tactical control through familiarity. However, one could view this as a visual metaphor indicating that the Sith lord has not let the past die as much as he, or his master Darth Sidious, would like to believe.

What Color Lightsaber Does Darth Vader Have?

Darth Vader’s lightsaber color is red. The Sith and other adherents to the dark side of the Force all use red lightsabers, from Count Dooku to Kylo Ren.

How & When Does Darth Vader Get His Red Lightsaber?

The first red lightsaber Darth Vader has is technically not the one from the original trilogy. Shortly after becoming a Sith Lord, with the Great Jedi Purge in full effect, Emperor Palpatine orders Darth Vader to hunt down Kirak Infil’a (a Jedi Master in hiding) and obtain his lightsaber. He does, then takes the saber to Mustafar, a place that represents his anger, hatred and pain, to bleed its kyber crystal — the Sith practice of pouring those negative emotions, their source of power, into the kyber crystal to corrupt it and turn it red.

While Kirak Infil’a’s hilt is destroyed in a confrontation with bounty hunters, Vader salvages its bled kyber crystal. This serves as a basis for the new hilt he creates — the classic Darth Vader lightsaber hilt that is our focus. This backstory for Vader’s lightsaber was established in the 2017 Darth Vader comic series published by Marvel and written by Charles Soule.

Darth Vader’s lightsaber has shown up many times across media, including in movies, shows, novels, comic books and video games like Jedi: Fallen Order. Let’s look at the most notable appearances of Darth Vader with his lightsaber on screen, both animated and live-action. The following are listed in timeline order, not release order. 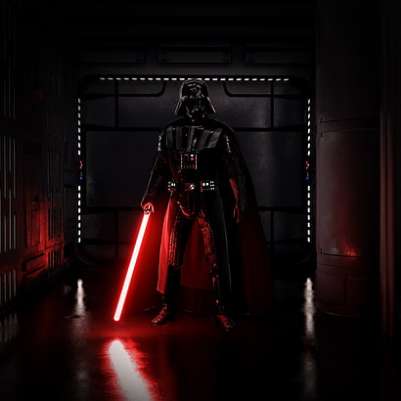 While not significant in terms of screentime, this appearance is certainly impactful to the overall Star Wars canon. The series finale of The Clone Wars, titled “Victory and Death,” features a flash-forward epilogue in which Darth Vader, lightsaber at his side, discovers the wreckage of the Tribunal along with the discarded lightsaber of his former padawan Ahsoka Tano.

The Disney+ series Obi-Wan Kenobi, which focuses on Obi-Wan’s life between Episode III – Revenge of The Sith and Episode IV – A New Hope, features several appearances from Darth Vader’s lightsaber, most notably in the rematch between Vader and his former master.

Vader’s presence looms over Rebels, and the series features some significant Darth Vader lightsaber duels, including against Kanan Jarrus and, in the epic Duel on Malachor, both Ezra Bridger and Ahsoka.

Rogue One: A Star Wars Story

Darth Vader’s appearance in Rogue One is a fan favorite for good reason. His siege of the rebel ship during the Battle of Scarif features some of the most incredible lightsaber maneuvers ever committed to film, as Vader’s lightsaber slashes through a group of “Rebel scum” with cunning precision.

The Death Star Duel in A New Hope, featuring the final confrontation between Vader and Obi-Wan Kenobi, is the first appearance of Darth Vader’s lightsaber on screen. Viewers in 1977 had never seen anything like it, and Obi-Wan’s death at the hands of the Sith Lord cemented Vader as one of cinema’s greatest villains.

Episode V – The Empire Strikes Back

The silhouettes of Luke Skywalker and Darth Vader locked in an intense duel on Cloud City form one of the most enduring images in Star Wars. Here, we see Vader dueling with his red lightsaber against Luke using his old blue one — just before cutting Luke’s hand off and delivering that most devastating line, “I am your father.” While Vader’s lightsaber is truly terrifying here, it’s his words that cut Luke down.

Episode VI – Return of the Jedi

The final Darth Vader lightsaber duel is during the Battle of Endor with Luke, now a Jedi possessing a green lightsaber with a hilt modeled after Obi-Wan’s, in the Emperor’s throne room on the second Death Star. As Luke tries to kill Palpatine, Vader once again attempts to lure him to the dark side — but Luke resists, and it’s ultimately Vader who turns, destroying the Emperor and becoming Anakin Skywalker once again just before his death.

What Happened to Darth Vader’s Lightsaber?

In their final confrontation, Luke knocks Darth Vader down and cuts off his hand — the one gripping his lightsaber. Darth Vader’s lightsaber, along with his severed hand, falls into the reactor shaft of the second Death Star.

What Lightsaber Form Does Darth Vader Use?

Another critical point of discussion regarding Darth Vader: lightsaber form. Vader employs Form V, which has two variants: Shien and Djem So. Both are considered aggressive forms of lightsaber combat that focus on using opponents’ attacks against them, alternating quickly between defense and offense. While Anakin used Shien, as Vader, he developed his own version of Form V, incorporating elements of other forms into something even more brutally aggressive.

“When I left you, I was but the learner. Now I am the master.” —Darth Vader

Craft Your Own Custom Lightsaber Now

If you want to follow in the footsteps of Darth Vader, a lightsaber is your first step. We offer an incredible selection of lightsaber hilt designs inspired by the dark side, with custom options for the blade, electronics and more. Forge your destiny today.

Anakin Becomes Darth Vader: From Blue to Red Lightsaber You could make a very convincing argument that Darth Vader is the most famous villain…
Anakin’s Lightsaber: The Most Storied Weapon in All of Star Wars There are a number of ways that lightsabers can achieve notoriety. Some are renowned for their unusual design…
Which Star Wars Characters Wield a Red Saber? With so many lightsaber colors in the Star Wars universe, it can be difficult to recount which character wields which saber. In this series of articles…