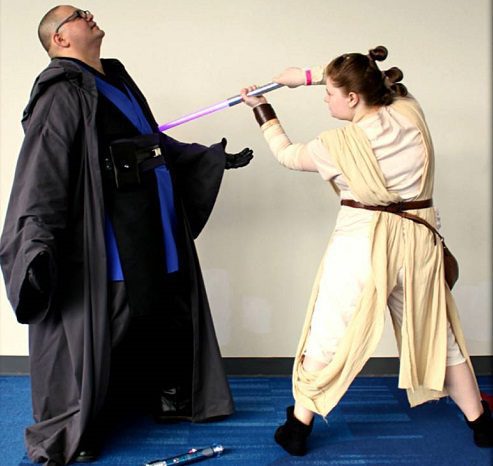 Is Rey a Gray Jedi?

The Force Awakens, appearing in theaters a year ago, set the stage for the latest iteration of the Star Wars saga.  New characters and storylines were introduced, leading fans to wonder which direction the series will go. The newest  Star Wars release: The Last Jedi dropped hints and clues to just that. One of the most heavily scrutinized topics is the future of the mysterious protagonist, Rey.  She is a human scavenger that grew up alone on the desert planet Jakku after her family abandoned her there. As Rey grew older, she demonstrated a high-level of intelligence and honed her skills as a warrior, all the while hoping that her family would return for her.  Once she encountered the fun-loving BB-8 droid her life changed forever, and we all know the rest.

One of the most heavily theorized conversations surrounding Rey in The Last Jedi is if she is a Gray Jedi. The first thought that comes to mind… What is a Gray Jedi? The term is used to describe any individual in the Star Wars galaxy that has the Force and utilizes both the Light and the Dark sides. Indeed, the definition itself is hazy and leaves room for interpretation. Is Rey a grey Jedi? She is even unsure which side of the Force she most closely aligns with. Even her trainer, Luke Skywalker, is skeptical of where her power lies.  In a scene from the movie, Luke says “I’ve seen this raw strength only once before. It didn’t scare me enough then. It does now.” Luke’s concern may be that Rey is too strong for him to train, and the assumption is that Rey may fall victim to the powers of the Dark side and join the ranks of Kylo Ren, Lord Snoke, and the First Order.

The theories start to fly when we break down the Last Jedi trailer and Star Wars history.  Even though Rey can reach scary levels of strength, it doesn’t mean she is destined for the Dark side.  In fact, Rey may be able to leverage both her Light side orientation and the incredible power of the Dark side to become the prophesized Gray Jedi, which won’t bring clarity to the ambiguous Star Wars: The Last Jedi title.

The most dedicated fans recall the Jedi Handbook, the Journal Of The Whills, and reference the following passage:

After the darkness, shines through the light.

The difference, they say, is only made right,

By the resolving of gray,

Although originally unclear, Luke Skywalker indicated for the Jedi Order to prevail; an alternative path would be required.  This may be the line towed by Rey, assumingly the last Jedi. Another hint that this is true is when Luke asks what she sees, she responds, “Light. Darkness. A balance.”  A-ha! While the answer may seem obvious, we doubt the writers of the latest Star Wars iteration would make the plot so blatantly clear. Twists and turns are bound to pop up throughout the remainder of the saga.

Additionally, the movie poster for Star Wars: The Last Jedi also features a clear depiction of Rey’s conflicting battle with the Light and Dark side.  It shows Rey in the middle of the poster, pointing her lightsaber up to the sky. At the hilt of the blade is a blue lightsaber and at the end a red lightsaber.  The middle, gray! Additionally, Luke Skywalker’s face appears on one side of the blade opposite Kylo Ren’s, indicating there will be a struggle. It is worth noting that Luke’s face appears much larger and may imply that the Light side is stronger within Rey.

Lastly, we do not yet know who Rey’s parents are.  Her origins would provide significant insight into her past, and if her parents aligned with the Light side, Dark side, or were perhaps themselves, Gray Jedi.  More questions than answers have certainly unfolded during the release of the newest trailer.  Is Rey a Grey Jedi? Undoubtedly, we will gain clarity on the direction of the series, and which path the mysterious Rey will journey down.