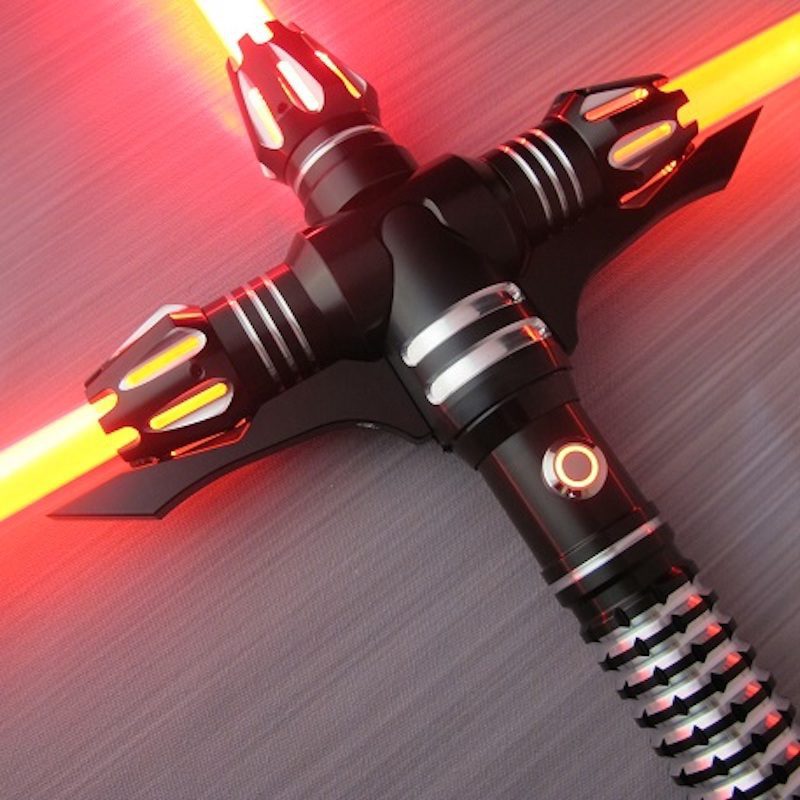 Kylo Ren is without question one of the most dynamic and memorable of all the characters introduced in the third Star Wars trilogy, in large part due to his skill with a lightsaber. That distinctive crossguard lightsaber certainly saw a lot of onscreen action, and made for some especially vivid moments. The following is a chronological overview of the lightsaber battles that involved this fabled commander of the First Order who eventually rejoined the light side.

In a snowy forest, Ren comes face to face with a revenge-seeking Finn, who happens to be wielding the most iconic lightsaber in the galaxy, a detail that does not escape the notice of the First Order commander. Finn puts up a valiant fight in his attempt to defend Rey, even scoring a glancing blow at one point, but Ren finally manages to knock him unconscious.

Moments after defeating Finn, Ren tries to retrieve the abandoned Skywalker lightsaber only to see it fly into the hands of Rey. A fierce saber duel between the two takes place. Ren quickly puts Rey on the defensive, pushing her further into the forest and to the precipice of a cliff. But Rey, drawing on the Force, battles back. She disarms him and delivers a blow that would leave him with a nasty facial scar. It’s Ren’s first defeat in a lightsaber duel, and one he would surely never forget.

Rey and Kylo Vs. Praetorian Guards (The Last Jedi)

After skewering Supreme Leader Snoke with a lightsaber, Ren promptly teams up with Rey to fight off the Elite Praetorian Guards who just witnessed their boss’s summary execution. Ren is in good form here, fending off multiple guards simultaneously at several points, but he’s forced to rely on an assist from Rey after dropping his crossguard lightsaber.

During the Battle of Crait, Kylo Ren finally has the opportunity to square off against his uncle Luke Skywalker. The ensuing duel, taking place on a flat, salt-covered field, comes to a premature end when Ren, charging fast with his lightsaber, cuts cleanly through Luke—who turns out to be a projected image intended to distract the First Order and enable the Resistance to escape.

Kylo Ren Vs. Rey on Kijimi (The Rise of Skywalker)

Kylo Ren, sporting a mask, duels with Rey in an unusual Force-connected battle where both participants are physically in two separate places. Ren is clearly in control of the duel, deftly deflecting Rey’s attacks and using the opportunity to play some psychological manipulation games with his opponent by forcing her to confront some painful truths about her past.

Confronted by Rey in the partly submerged wreckage of the second Death Star, Ren artfully bobs and weaves to evade her slashing lightsaber before he activates his own blade. Their duel is a pitched battle where both participants use the Force to pull off some impressive leaps and blocks. Ren manages to get the upper hand on a clearly fatigued Rey, but he loses the duel—and almost his life—after he’s distracted by the mentally transmitted thoughts of his dying mother, Leia Organa. It proves to be the last duel he would ever fight as Kylo Ren.

Kylo Ren Vs. Knights of Ren (The Rise of Skywalker)

While searching for Rey, Ren—actually Ben Solo, having recently reclaimed his birth identity—is attacked by the Knights of Ren, his former allies, in the Sith Citadel. Armed with only a blaster and the Force, Ben Solo gets knocked around a bit until Rey passes the legendary Skywalker lightsaber to him. He proceeds to lay waste to the Knights, even showing off some acrobatic moves in the process.

Want to learn more about Kylo Ren? Join the Ultrasabers online community at SaberForum.com!  You are also welcome to contact Ultrasabers if you have questions about any of our custom lightsabers for sale.