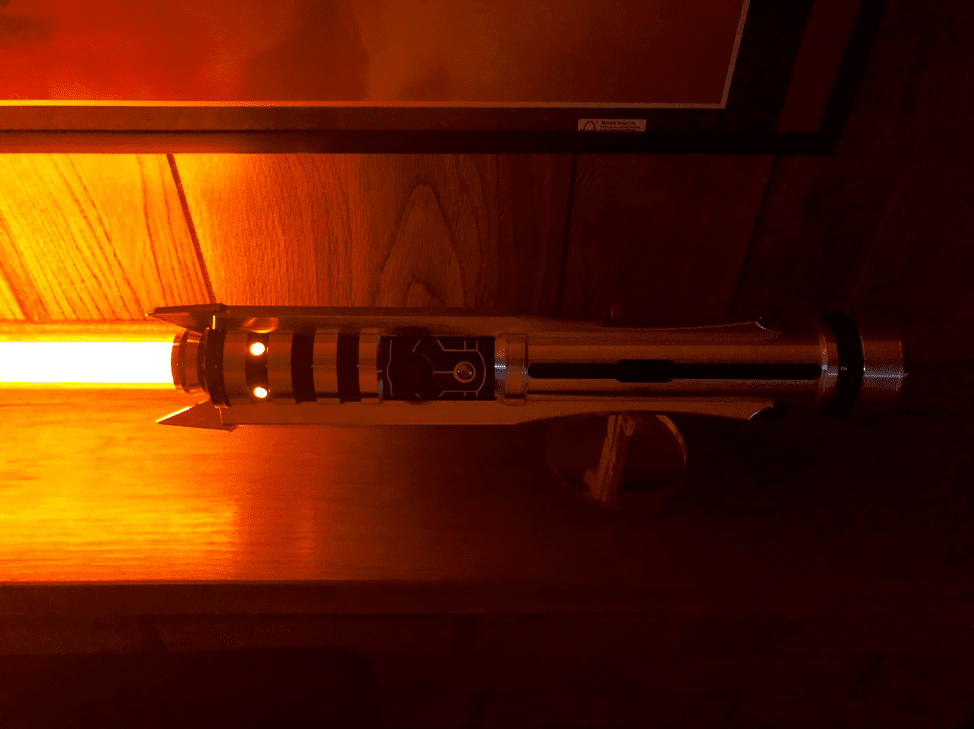 The Evolution of Darth Revan’s Lightsaber

When we imagine certain personages in the Star Wars universe, it’s only natural to visualize them with their preferred style of the lightsaber. We think of Darth Maul and his double-bladed red lightsaber, or Mace Windu’s purple blade. With other individuals, this turns into a multiple-choice exercise due to the different sabers they wielded at different times. If you prefer, you can envisage Luke Skywalker either with his classic blue lightsaber or with the green blade he created later in his career as a Jedi Knight.

One of the more complicated examples of this phenomenon is Revan, the Jedi who turned to the Dark Side and then turned away from it. Over the course of his tumultuous life, Revan wielded a variety of sabers at one time or another in accordance with his shifting allegiances and personal development. What follows is a brief overview of this fascinating figure in Star Wars mythology and the lightsabers he used.

Revan as a Jedi

The history of the human being who would become known far and wide as Darth Revan begins with his birth around 3994 BBY (Before the Battle of Yavin), during the Old Republic Era. He was a Padawan under Jedi Master Kreia (later Darth Traya) and showed great potential during his apprentice days.

After ascending to the status of Jedi Knight, Revan butted heads with the Jedi Council over the matter of the Mandalorian Wars. The Order preferred to stay clear of the conflict, but Revan had other ideas, founding the Revanchist movement against the Mandalorians. His efforts here—accompanied by his friend, Jedi Knight Malak—led to the defeat of Mandalore the Ultimate.

During this time, Revan wielded a single-bladed blue lightsaber with an alloy metal hilt as his primary saber. Some sources report that he also used a purple lightsaber to represent his independence from the dictates of the Jedi Council.

Revan as a Sith

Revan, along with Malak, fell under the influence of Sith Emperor Vitiate, who planned to use the mind-controlled duo for his own devious purposes. Revan and Malak managed to free themselves from Vitiate’s influence—but not from the influence of the Dark Side. Revan—now Darth Revan—established the Sith Empire with the intention of overthrowing and replacing the Galactic Republic. He also replaced the crystal in his lightsaber hilt, giving it the red blade associated with the Sith.

The ensuing Jedi Civil War nearly destroyed the Republic, but Revan’s efforts ultimately failed, and he was rendered comatose after a battle with a Jedi strike team led by Bastila Shan. Along the way, Darth Revan’s lightsaber was destroyed by a mutinous Malak.

Revan as a Jedi (Part II)

The Jedi Council used a memory wipe on Revan to remove his recollections of his Sith past and create a new identity for him as a loyal Republic solider. Now completely unaware of his recent flirtation with the dark side, Revan created a new lightsaber, with a blue blade as favored by the Jedi.

With Bastila and other companions at his side, he soon crossed paths with his former pal, Malak, who had taken control of the Sith Empire in Revan’s absence. Revan eventually defeated Malak in a lightsaber duel. Afterward, Revan made another lightsaber alteration, this time opting for a green blade.

Revan’s dark memories of his Sith past began to resurface, little by little. Another aspect of his past to resurface was Sith Emperor Vitiate. Attempting to assassinate Vitiate, Revan was captured and put into statis—a state that imprisoned the body while leaving the mind free—for 300 years, during which time he used his mental powers to battle the Sith Emperor.

Though Revan was eventually freed, the experience of being imprisoned for centuries took a huge toll on his mind (small wonder!), and in recognition of his trials, his lightsaber underwent its final alteration, changing to a violet blade. This lightsaber would see action in the battle against Darth Malgus’ Imperial forces.

There are certainly a lot of lightsabers in the Star Wars universe, and that’s why we at Ultrasabers are constantly expanding our already large selection of blades, hilts, and accessories. Feel free to explore our online catalog, and contact us with any questions you have about our products.