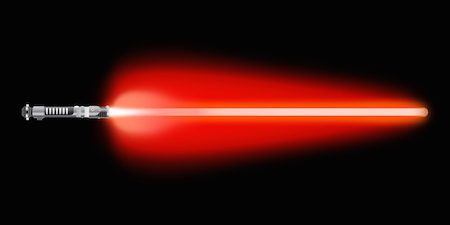 History of the Red Lightsaber

Red crystals are synthetic, and commonly referred to as Synth-crystals.  The synthetic lightsaber crystal is formed artificially to resemble their naturally formed counterparts which grow organically throughout the galaxy. While the majority of synthetic crystals were indeed red, they were known to emit other colors depending on the previously mentioned characteristics.

It is unclear when the Sith and other dark side aligned groups began to incorporate red crystals into their lightsabers, but the earliest documentation occurs in the days of the Old Sith Empire.  The first known Sith to brandish a red-bladed saber was Karness Muur, a Knight of the Jedi Order who crumbled to his lust for power and became a Dark Jedi. From there, several notable Dark Jedi such as Haazen, Exar Kun, Darth Revan, and Darth Malak all wielded red lightsabers, which sparked the widespread adoption of the color among their Sith followers.  Following the spread of red crystals among the Sith Empire, red-hued crystal users were labeled Darksiders.

A primary reason that synthetic lightsaber crystal became so widespread among the Sith was their need to remain hidden from the Jedi.  The Jedi Order had long since mined planets such as Illum, which contained a plethora of naturally growing crystals. Eventually, synthetic crystals became ingrained in the culture and tradition of the Sith, with most members considering their red crystals to be superior to the crystals used by the Jedi.  The Sith considered their process of replicating crystals to indicate their power of manipulation over the Force. Oppositely, the Jedi dismissed the creation of synthetic lightsaber crystal, with the perspective that this was the quick and easy path. However, there have been cases of Jedi using synthetic crystals when natural crystals are not accessible.  The most notable case of this with a prominent Star Wars character was Luke Skywalker, who used a synthetic green crystal for his first lightsaber. During the reign of the Galactic Empire, Darth Sidious commanded the destruction of many sites where crystals were commonly found. This forced the New Jedi Order to rely almost exclusively on synthetic crystals to form their lightsabers.

Although synthetic crystals were originally considered unsuitable for use in lightsabers, the Sith discovered that they could create synth-crystals that were energized, magnetized, and modified using furnaces which caused the crystal to glow in harmonic vibration.  The red color was a result of the forging process, and the intention of the creator to augment the color to the crimson hue we’ve come to know. Nicknamed “bloodshine blades,” the crystal’s ability to change to reflect the intentions of the creator is rumored to foster a stronger bond between the lightsaber and wielder, but this is unconfirmed.

The furnace that the crystals are formed in was built to replicate the geological conditions of natural red lightsaber crystals.  Once the formula was perfected, acquiring the raw materials necessary to build the crystals were readily accessible. The materials would be placed into the machine and left to back between twenty-four to ninety-six hours. During this time, the creator would remain with the crystal and meditate on it through the Force, guiding its formation and bolstering the strength of the resulting crystal.  This is also where initiates would augment the red lightsaber crystal’s abilities to be best suited to the wielder’s needs. In addition to color, there are multiple variations of synthetic lightsaber crystals which affect the focus, strengths, and weaknesses of each blade.

Who Has the Red Lightsaber?

Who has the red lightsaber?  Individuals who used red lightsabers typically have a short fuse and would tend to anger frequently.  Physical attack is often the first reaction of a Dark Jedi when faced with adversity. Due to the fear with which most people would experience when confronted by red lightsaber wielders, these individuals commonly lived in solidarity. Personality traits of these individuals also include determined, spontaneous, arrogant, proud, selfish, audacious, and often merciless.   These warriors are unpredictable, channeling their inner-aggression into their dueling style and Force-alignment. Commonly suffering from tunnel vision, these warriors would stop at nothing to reach their full potential and obtain their deepest desires. Red lightsaber wielders are power-hungry and ruthless enemies, in some cases going mad with their yearning for dominance.

Learn more about the red lightsaber meaning and the Dark Jedi that wield them from Ultrasabers, your one-stop-shop for all things lightsaber related!