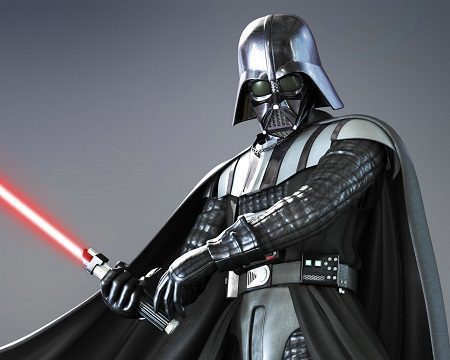 With so many lightsaber colors in the Star Wars universe, it can be difficult to recount which character wields which saber.  In this series of articles, we will be discussing three notorious Sith Lords that carried red lightsabers, their history, fighting style, skill set, and any rare abilities.

Darth Vader, the Sith Lord, formerly known as the Jedi Knight Anakin Skywalker, is perhaps the most recognizable character in the Star Wars series. A list of his notable achievements includes:

Anakin Skywalker first began to shift to the Dark Side when his wife Amidala became pregnant.  Skywalker started to have terrible visions of Amidala’s death during childbirth, and to prevent that fate, Anakin was driven to the dark side of the Force.  He then became an apprentice to Darth Sidious, who dubbed Anakin as Darth Vader. When dueling Obi-Wan Kenobi on the planet Mustafar, Darth Vader was devastatingly injured and went through intensive cybernetic surgery for him to walk again.  This is when Darth Vader was truly born and is presented in his most recognizable appearance of a black robotic suit, outfitted with a menacing helmet and face mask.

Bitter upon learning of the death of his wife, Vader continued to serve the Empire, ruthlessly murdering the remaining Jedi that survived following the execution of Order 66.  Additionally, Vader trained the Inquisitorius to become Jedi assassins and aid Darth Vader in his conquest to decimate the Jedi Order.

Vader was a skilled duelist, and utilized Form IV combat technique, easily deflecting blaster fire and striking with smooth, fluid motion.  Following the surgery in which Vader was outfitted with his cybernetic enhancements and armor, his fighting style became less acrobatic and shifted to powerful strikes from a stable stance. He also had remarkable force-abilities, often turning force pushes and chokes.

Darth Maul was a deadly Sith assassin who is highly recognizable due to his appearance, mannerisms, and overall fighting abilities.  A list of his notable achievements includes:

Darth Maul is another iconic villain.  His red skin complexion, black tattoos, horns on his head, and signature dual-bladed lightsaber are unique, and there are few of his Dathomirian Zabrak species still in existence.  Maul was trained by Darth Sidious to become fearless, relentless, and lethal when carrying out the will of the Sith.

Maul was thought to have perished in the Battle of Naboo after being cut in half by Obi-Wan Kenobi, but he survived and had his legs replaced by a six-legged apparatus while on the junkyard planet of Lotho Minor.  However, Obi-Wan Kenobi eventually faced Darth Maul again on Tatooine and finished him once and for all.

Darth Maul was a lightsaber duelist who incorporated acrobatic stunts and the incredible skill to battle multiple opponents at once.  He utilized the aggressive Form VII during the battle, and had significant Force abilities. Mind probing and creating apparitions of himself were in his repertoire, and additionally, magic practices of the Nightsisters.

Darth Sidious is a Sith Lord that commanded the Empire during their reign over the galaxy.  His actions shifted the course of history on multiple occasions. A list of his notable achievements includes:

Prior to becoming Darth Sidious, he was known as Sheev Palpatine and served the Galactic Republic as a politician.  Sidious was trained in the ways of the dark side of the Force by Darth Plagueis. Sidious secretly formed the Empire behind the scenes before unveiling his regime and executing Order 66 to destroy the Jedi Order. A master of manipulation and strategy, Sidious was an expert of deception and outsourcing his servants to carry out his will, while Sidious remained beneath the imperial Palace attempting to use the dark side to reshape the Force to his own ends.

Darth Sidious is regarded as one of the all-time most powerful force-attuned individuals. Palpatine’s red lightsaber is first revealed when four Jedi masters attempt to arrest him in the chancellor’s office. Palpatine reveals himself as the Dark Lord of the Sith they have been looking for and quickly kills 3 of the 4 Jedi trying to take him captive. Mace Windu then becomes the first and only Jedi to ever defeat Sidious in battle, although he did not kill him. Anakin Skywalker intervenes to stop Windu from killing the emperor. Sidious then uses his signature force-lightning to electrocute Windu with such force that he is thrown backward off the Coruscant high rise.

Sidious was also adept at foreseeing the future, Force Persuade, Force-enhanced speed, and possessed a wealth of Sith magic knowledge.