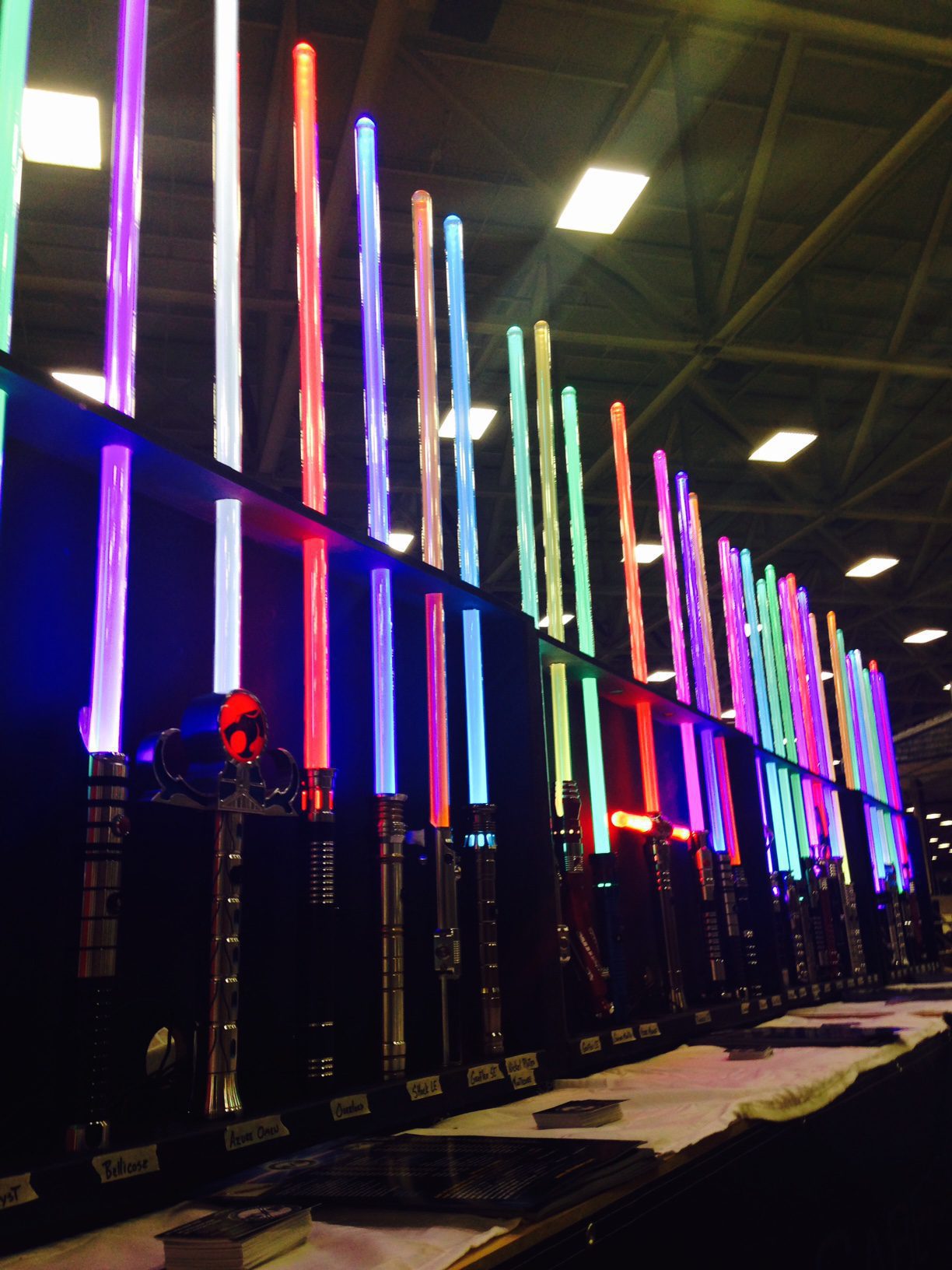 Lightsabers in the Star Wars universe exist in a wide variety of types. They tend to reflect the characteristics of their wielders: their combat preferences, their relationship to the Force, and maybe their plain old personal taste. Every aspect of the lightsaber has significance, in much the same way an individual’s tattoos aren’t just random graphics but have strong personal meaning for the wearer. This is particularly true of the lightsaber’s color, which is seldom merely a random, incidental detail. A blue lightsaber, for instance, “means” something very different than a black lightsaber.

The color of a lightsaber normally derives from the kind of kyber crystal—which is itself typically associated with its own lore and significance—that generates the blade. The more common lightsaber colors indicate an individual’s devotion to a cause or tradition upheld by countless others, while some of the more esoteric colors are linked to a particular character, and reflect that person’s unique history. This is a complicated subject, so what follows is merely a quick overview of the significance of lightsaber colors intended to help you choose the right one.

Blue – Blue lightsabers are associated with the Jedi and their peacekeeping cause. It is not the only possible tint for a Jedi lightsaber, but it has been considered the archetypal Jedi color ever since Luke Skywalker took up his father’s saber in A New Hope. The holder of the blue lightsaber is an adherent of the Jedi cause; he or she believes in peace, order, knowledge, and service to others.

Red – Red lightsabers are associated with the Sith, the eternal enemies of the Jedi. The wielder of the red lightsaber is devoted to the ideals of the Sith Order: ruthlessness, “might makes right,” and the valorization of power and self-fulfillment—essentially the opposite of what the Jedi espouse.

Green – Green lightsabers are also affiliated with the Jedi, although this is a less common coloration than the standard blue. Green signifies the user’s preference for harmony and diplomacy rather than combat, but the possessor of this type of lightsaber is certainly fully capable of going toe-to-toe when the occasion demands. It is strongly linked to experience and wisdom. Yoda is one of the most famous wielders of the green lightsaber.

Orange – Orange lightsabers are a very recent addition to the canon, having become officially introduced with the release of Star Wars Jedi: Fallen Order in November 2019. Little is known about the orange lightsaber, although the fact that it is wielded by Jedi Padawan Cal Kestis should provide some clues as to the philosophical affiliations of this color.

Yellow – In the Expanded Universe, yellow lightsabers are known as the preferred accessory of the Jedi Sentinel. They combined the fighting prowess of the Guardians with the diplomatic tactics of the Consulars. In current canon, Asajj Ventress and Ahsoka Tano have both been spotted with the yellow lightsaber in their hands. And what is Rey holding at the end of The Rise of Skywalker? Her new lightsaber certainly seems to have a yellow blade…

Purple – Purple lightsabers are known as the preferred choice of Jedi Master Mace Windu. It was Windu’s final lightsaber, crafted after he became known as one of the most respected members of the Jedi Council, and anyone who wields a saber of this color pays tribute to a fierce warrior.

White – Ahsoka Tano created a pair of white lightsabers after she left the Jedi Order following her acquittal on charges of sedition. Although she was clearly shown to be innocent and was even invited to return to the Order, the experience badly damaged Tano’s faith in the Jedi hierarchy. Even so, she refused to go over to the dark side. Instead, Tano became a free agent of sorts—sympathetic to Jedi ideals but operating independently of the Order. The holder of the white lightsaber is, like Tano, a lone wolf who identifies with the light side of the Force.

Black – Black, as a lightsaber color, is pretty much the exclusive domain of the infamous Darksaber. That is a unique, powerful, and very intimidating saber invented by Tarre Vizsla, the Mandalorian, and it was traditionally the symbol of House Vizsla. Over the years it passed through the hands of a wide range of owners, from Moff Gideon to Darth Maul. It is said that no one can rightfully claim the Darksaber without defeating its current owner.

No matter what kind of lightsaber color you prefer, it’s easy to find what you’re looking for in UltrasSabers’ lightsaber catalog. Don’t hesitate to contact UltrasSabers with your questions about their products.

Lightsaber Accessories You Should Definitely Consider

Apart from intense enthusiasm, collectors of all kinds have one common characteristic: they tend to accumulate a lot of stuff relating to their hobby. Nobody ever stopped at collecting one Blu-Ray, one baseball card, one video game, or one car. If you’re really into a certain pastime, it’s only natural to cast a wide net, […]