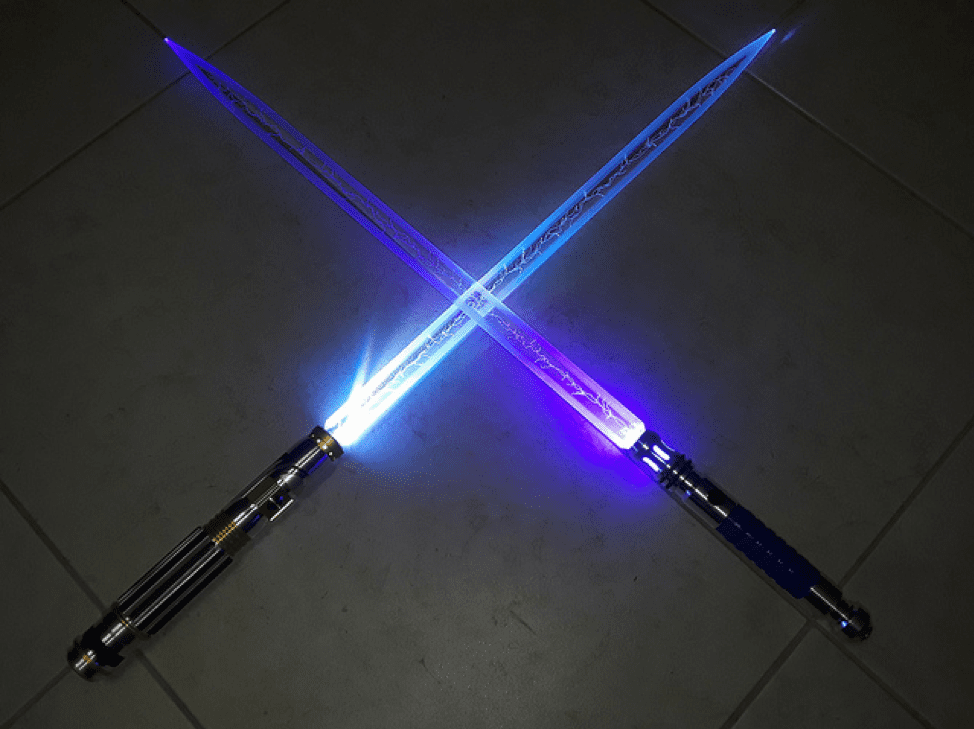 When the average person on the street thinks about the Star Wars universe, it’s likely that they conjure up an image of the classic red or blue single-blade lightsaber, not a darksaber. But as die-hard aficionados realize, the Star Wars universe has developed a number of alternative saber designs—and, in fact, exploring these different versions is one of the keener pleasures of lightsaber collecting.

Some lightsabers are created to expand the wielder’s combat options—for instance, the double-blade saber opens up a whole range of additional possibilities for those who know how to use it effectively. Other non-standard sabers have a more symbolic value, such as Mace Windu’s purple lightsaber, the color of which reflects its owner’s rank on the Jedi Council. Still other lightsabers deviate from the norm in both form and function. The famous—some would say infamous—Darksaber is one such example of this alternative trend in lightsaber development.

What Is the Darksaber?

The Darksaber is characterized by its unique black plasma blade, which is flat and thin, shorter than the conventional saber blade, and shaped at the end into a curved, tapered point. It resembles a sword more than it does a standard lightsaber. Additionally, the Darksaber emits a higher-pitched hum than the average saber, and it sometimes emanates an electrical-like crackle when it comes into contact with another blade.

The innovations of the Darksaber are more than merely cosmetic. This specialized saber is engineered to deflect lightsaber blades—in fact, it seems to attract an opponent’s blade to it, making offensive strikes difficult against the Darksaber user.

It is important to understand that the Darksaber is a unique weapon, not a style that can be imitated. That accounts for its rarity in the Star Wars universe—there is literally only one in existence.

Tradition holds that the Darksaber can be won only by besting its owner in combat. All other methods of taking possession of this black-bladed lightsaber are considered invalid. As we shall see, the enormous symbolic value attached to the Darksaber tends to encourage individuals to honor this long-standing custom.

A Brief History of the Darksaber

This history of the Darksaber begins with its creator, Tarre Vizsla, a human male from the planet Mandalore. Vizsla was the first Mandalorian to be inducted into the Jedi Order. With this powerful black lightsaber at his side, Vizsla became ruler, or Mandalore, of his home planet, and his distinctive dark lightsaber became strongly linked to this station.

Following the death of Tarre Vizsla, the Darksaber fell into the hands of the Jedi Temple. It would not remain there forever, though. During the fall of the Old Republic, members of House Vizsla—one of the major political factions of Mandalore—managed to steal the Darksaber from the Jedi. This aided House Vizsla immensely in assuming leadership of Mandalore. The Darksaber would remain with House Vizsla for generations.

Mandalore did not enjoy stable governance for long, however, as the event known as the Mandalorian cataclysm and a subsequent civil war turned it into a chaotic battleground. Eventually, the Mandalorian known as Pre Vizsla, leader of the terrorist group called Death Watch, wielded the black lightsaber in his efforts to seize control of Mandalore and return it to its past glories, with help from Darth Maul. Vizsla would succeed in this mission, but victory proved to be short-lived. Vizsla made the mistake of betraying Maul, who returned the favor by killing him in a lightsaber duel. This made Darth Maul the rightful owner of the Darksaber.

Maul, however, soon lost the Darksaber when Darth Sidious defeated him in combat and sent him away to prison on Stygeon Prime. After getting out of Stygeon Prime, Maul made his way to Zanbar and regained possession of the Darksaber. He would use it successfully in many ensuing battles.

From here, we jump ahead to the Imperial Era, when the Mandalorian warrior Sabine Wren discovered the Darksaber on the planet Dathomir. She underwent training under Jedi Knight Kanan Jarrus so she could effectively use the saber in service of the rebel cause. Things wouldn’t go too smoothly for Wren, however. She temporarily lost possession of the Darksaber as Gar Saxon, Darth Maul’s underling, took control of it. However, Wren defeated Saxon in battle and became, under Mandalorian tradition, its true owner.

Wren eventually passed the Darksaber to Bo-Katan Kryze, who used the fabled Mandalorian sword to become the new Mandalore.

At UltraSabers, you can find a wide selection of single and double-blade lightsabers in our inventory. Please contact us with any questions you have about our products.