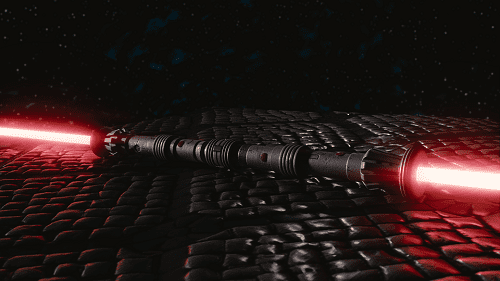 What is the Meaning of the Red Lightsaber?

Red lightsabers are notorious in Star Wars as a weapon carried by the most villainous of characters, the Sith.  These villains had but one purpose in life, to eliminate the Jedi Order and gain control as tyrants over the galaxy.  The Sith followed the Rule of Two, which dictated that there is to be one master and one apprentice. The apprentice would cleanse themselves of all physical and mental shortcomings, in many cases being controlled by their master until the point that their soul was broken.  While this purpose uniformly united most Sith, there were many instances throughout history in which Sith Lords would stray from this common goal in order to pursue conquests of their own.

They would sit with the crystal for days in these furnaces, subjecting themselves to massive amounts of physical and mental stress.  There they would meditate on the crystal, forcing their will upon it, and imposing immense power. The outcome would be a blood red synthetic crystal that would occasionally be cracked.  Unlike the Jedi, who wielded various colored lightsabers, the Sith all carried red lightsabers. It was a symbol of their unity and unwavering dedication to the Dark side of the Force.

Lightsaber color shares a strong affinity with the identity of the user.  Characteristics that were commonly seen in their wielders of red lightsabers include that of being hasty, yearning for control, extreme vanity, and unrivaled levels of narcissism. Brave and unable to be tied down, red is generally associated with instability and wildness.  While red lightsaber wielders are often eccentric, they tend to focus on their master plan and implement an all-encompassing methodology in their strategy. In addition to the qualities listed above, the color read is also closely related to outrage, dominance, and a lack of concern for the well-being of others.

When it comes to the personality of red lightsabers, the individuals that wielded them tended to become frantic easily.  They would often be unable to contain their emotions, and would settle almost every challenge they faced with brutality, violence, and no mercy.  Extremely persistent individuals, these warriors will stop at nothing to accomplish their goals, even at the sacrifice of everything they hold near and dear to their heart, or what is left of it.  They would destroy anything and everything in their path if it meant acquiring their deepest desire. Demonstrating excessive amounts of mental capacity and strength, these individuals will do whatever it takes.

Regarding fighting style, red lightsabers utilized by duelists that fought viciously and fearlessly in battle.  The Sith were among the most elite warriors in the galaxy. They would channel their emotions of dread and disdain to release their inner-most force, focusing on their dedication of the Dark side to grasp the excitement of battle.  Due to the very nature of this physical and mental requirements, their fighting style would take an immense toll on their bodies, inducing severe strain. They allow their power-hungry cravings to grab hold of their fighting style, and it becomes apparent in their whirlwind of hostile strikes, acrobatic exhibition, powerful assaults, and absence of self-regard and protection of their personal-self.

In addition to their skill with a lightsaber, these warriors would commonly utilize various Force-based attacks to defeat their opponents.  The most widely adopted techniques were that of Force lightning, Force choke, and of course, mind control. Force lightning is perhaps the most fearsome attack of all, with streaks of electricity resonating from their fingers and electrocuting the target, often to the brink of death.  They rule as dictators over their armed forces, crushing insubordinates with swift and decisive action. If you cross a Sith Lord, you are as good as dead.