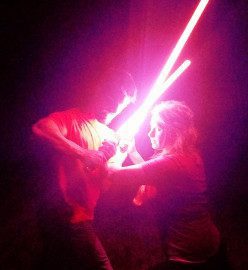 The History of Lightsaber Combat

Before lightsabers, the Jedi order carried traditional swords crafted from a variety of alloys, crystals, and common metals and featured either one or two sharpened edges for slicing and dicing. Because of this, techniques & styles of sword-based combat were innovated and limited to the goal of striking the target using one of these two sides, or turning the hand to block with the broad side of the blade.

With the introduction of the lightsaber, the direction of the wielder’s movements and strikes suddenly did not matter as the lightsaber blade could cut from all sides, and with significantly less force. This would eventually lead to the drastic change in fighting styles from sword to lightsaber.

During the transitional years from metal swords to lightsabers, the Jedi Order would continue to fight using existing & traditional styles while incorporating the new weapon. Because of their unique nature, lightsabers held an astounding advantage against the common blade, and thus there was little need to alter techniques. Upon the advent of the Dark Jedi and as it became more common for both parties in the battle to wield lightsabers, lightsaber fighting styles were forced to evolve.

Over time seven lightsaber forms would be born; each different from the last, and each with an amazing array of advantages and disadvantages depending on the fighter.