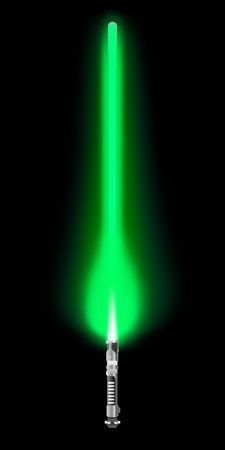 What is the Meaning of the Green Lightsaber?

Lightsabers have fascinated Star Wars fans across multiple generations. There are many different types of lightsabers, but they are generally a variation of one of the following colors: Red, blue, green, yellow, orange, purple, brown, white, and the rarest of all, black. To understand the role that each saber plays we must first understand where the color originates from. Color comes from cyber crystals.

The crystals start as colorless until they are found by a Jedi Padawan.  The Padawan’s personality, as well as the will of the Force, will eventually determine the color of the lightsaber. The force would guide the Jedi youngling to their crystal.  It world hear its music in harmony, being attracted to the crystal and forming a bond. If someone finds a crystal who is not the Jedi youngling it is intended for, the crystal would remain cold to the touch.  These crystals grow naturally on a variety of different planets across the galaxy, such as in the crystal cave on the planet Illum. In this article, we will be discussing the meaning of green lightsabers.

Green is considered the second most common lightsaber, behind blue. Peace is perhaps the strongest representation of the green lightsaber.  The Jedi knights that wield this color lightsaber value concord, and prefer a universe in which the inhabitants live harmoniously. They are also known to demonstrate vast amounts of goodwill and carry themselves with a friendly, helpful, and cooperative attitude.   Lastly, the green lightsaber color holds a strong affinity with nature.

The color green, in and of itself, represents growth and regeneration.  The individuals that brandish a green lightsaber look upon their own life journey with that perspective.  They are in sync with their surroundings and all creatures that occupy the universe. It is very common for these individuals to also be extremely spiritual, in some cases mastering Force spirit consciousness.   These Jedi strive to constantly learn and become more knowledgeable about the universe as a whole.

Green lightsabers are typically used by Jedi who has strong abilities with the force. Telekinetic abilities, such as moving large objects, and mind tricks are just some of the useful tools in these Jedi’s repertoire.  Jedi Consulars were most well known for their alignment with green lightsabers. These Jedi Consulars and avoid combat at all costs, and would rather opt for meditation or negotiation in place of violence.  Although bold, you would be hard-pressed to find an aggressive Jedi Consular. They rely on their lightsabers as a last resort, most often taking a defensive technique in which they only go on the offensive once provoked enough.

These individuals are poised, tranquil, adaptable and understanding.  All of these characteristics are highly attuned with the green lightsaber. These Jedi are educated and preserving, seeking solutions to their problems by first attempting to communicate with reason and debate as opposed to inflicting pain on to their enemies.  Due to the very nature of their being, these Jedi are not often outwitted. Planning is essential to green lightsaber wielder’s success on the battlefield and in the public forum.

Wiser, more senior Jedi tended to carry this color saber.  It is an identifying symbol that commanded respect across the galaxy.  Jedi leaders who carried these lightsabers would many times serve as tactical military generals, using their brainpower and strategic thinking to calculate superb military operations.  Green lightsabers have been wielded by a number of famous Jedi including Master Yoda, Qui-Gon Jinn, and Luke Skywalker. In Return of the Jedi, Luke’s lightsaber color switched from blue to green, possibly representing his development as a skilled Jedi warrior.