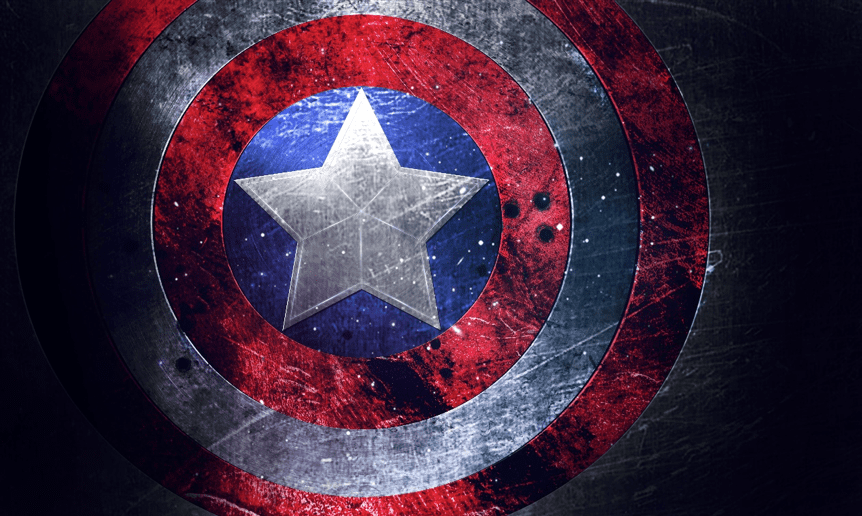 Captain America’s Shield Vs. A Lightsaber

For fans of comic books and various media offshoots, there’s a certain type of debate topic that never seems to grow old: Could X beat Y? Can Superman run faster than the Flash? Is Daredevil more acrobatic than Batman? Does Lex Luthor have a higher IQ than Doctor Doom? Can Reed Richards out-stretch the Elongated Man?

Those are just a few questions that have haunted the minds of fans through the years. Debating these things can be a fun exercise, even if it rarely results in a definitive answer, because it gives us an excuse to draw upon our reservoir of knowledge and make reasonable conjectures from it.

One such topic that has attracted a more-than-usual level of debate is a variation on the old Irresistible Force vs. Immovable Object question: What happens when a lightsaber strikes Captain America’s shield? There doesn’t seem to be a simple answer; after all, Cap’s shield is basically indestructible, while the lightsaber can cut through basically anything.

Given that Hollywood is unlikely to film a shield vs. lightsaber battle that could settle the question for us any time soon, it might seem that we’re at an impasse. However, a deeper dive into established canon may yield some useful info that may sway the debate. Let’s have a closer look at these two iconic objects.

What Is Captain America’s Shield Made Of?

The material that composes Cap’s shield is a vibranium-steel alloy. Vibranium is a metallic element found exclusively in the Marvel Universe, originating in the Sub-Saharan African country of Wakanda. Vibranium material is famed for its extraordinary ability to absorb kinetic energy. That’s why Cap’s vibranium shield can withstand virtually any force, from atomic explosions to Thor’s hammer, Mjolnir. In the Secret Wars, Cap’s shield was even shown to be resistant to the Human Torch’s “nova flame.”

Yet the Secret Wars saga also provides an interesting counter-example, as the shield is later destroyed by Doctor Doom after he attains the powers of the Beyonder. In fact, Cap’s shield has gotten dinged up on a number of other occasions. Thanos and Molecule Man, for example, have both managed to smash the shield, although it took superhuman powers to do so. The evidence is clear, then, that Cap’s shield is not absolutely indestructible.

What Is a Star Wars Lightsaber Made Of?

The blade of a lightsaber is made of extremely hot pure plasma that is contained by an energy field to prevent the heat from transmitting beyond the surface of the blade. This allows the user to wield a lightsaber without being scorched. You can literally place your hand right next to the blade without becoming injured or feeling the heat it generates, provided that you do not make contact with it.

Lightsabers are capable of cutting through virtually any material, and this cutting ability is independent of the user’s physical strength. Merely touching an object will generally inflict major damage.

As with Captain America’s shield, however, there are limits to the lightsaber’s strength. It has trouble with a few rare materials, such as cortosis and Mandalorian iron (beskar)—the latter is sometimes forged into armor for exactly this reason.

Interestingly, none other than Mark Hamill has weighed in on the debate. Asked on Twitter whether a lightsaber could cut through Cap’s shield, he offered the following response:

In the #MarvelUniverse- NO
In the #StarWarsUniverse- Luke wouldn’t fight a hero, but if asked to do so, he could cut it into a million little pieces.

Hamill’s reply makes an important point: Star Wars isn’t part of the Marvel Universe. Captain America’s shield may be resistant to virtually all forces in the world as he knows it, but his universe doesn’t contain many of the elements and phenomena we associate with Star Wars. It’s certainly not a given that the shield would be able to resist a lightsaber strike.

There are other reasons to question the durability of Cap’s shield. Kyle Hill’s well-regarded YouTube channel Because Science, which is dedicated to exploring scientific concepts in popular culture, has recorded a video addressing the lightsaber vs. shield conundrum. Hill thinks that the shield should be able to deflect a lightsaber blow—but it would be a different matter entirely if the saber were to be held against the shield for a significant period of time. In that case, the shield would begin to melt under the immense heat of the lightsaber.

As lightsaber aficionados, we lean toward Hill’s position on this matter: Captain America’s shield wouldn’t be able to hold up to a saber in a prolonged engagement. That’s less a criticism of the shield than an acknowledgement of the awesome power of the lightsaber. If you’d like to discuss lightsaber lore and history in greater detail, you can find the audience you seek at our official online forum, SaberForum.com. And if you have any questions about our inventory of lightsaber products, feel free to contact us any time.