Few things have excited Star Wars fans as much as the reveal of Darth Maul’s double-bladed lightsaber — the first of its kind on screen. The hype for Episode I – The Phantom Menace was off the charts, and the lightsaber Darth Maul used contributed immensely to that, as well as the striking image of his horned head and tattooed face. While the character had precious little screen time in the film, he left a lasting impression — and his story has only become more compelling across The Clone Wars, Star Wars Rebels and other stories in Star Wars. For Darth Maul, lightsaber duels only served to satiate his bloodlust and sharpen the blade of hatred that grew within — hate so strong it needed two blades.

Each trilogy in the Skywalker Saga has featured a lightsaber that surprised and delighted fans in the lead up to release: Luke’s green lightsaber for Return of the Jedi, Kylo Ren’s crossguard lightsaber for The Force Awakens. But it’s Darth Maul, with lightsaber skills nearly unmatched among the Sith, who takes the cake. Let’s review some of the most important facts about Darth Maul’s lightsaber to understand more about the famous Dathomirian Zabrak.

How Did Darth Maul Get His Lightsaber?

Darth Maul designed his original lightsaber himself. After studying how to use a double-bladed lightsaber, Darth Maul built his own based on plans found in a Sith Holocron belonging to his master, Darth Sidious. The process involved joining two lightsaber hilts together at their ends.

Why Does Darth Maul Have a Double Lightsaber?

Darth Maul has a double-bladed lightsaber because he trained extensively to use one, channeling his rage and hatred of the Jedi to make himself the ultimate weapon of the Sith. Maul’s prowess with his lightsaber gave him the choice to use only one blade or pop both to engage more than one enemy at a time.

In Legends canon, Darth Maul’s double-bladed lightsaber was born out of necessity. He’d been sent to kill Siolo Ur Manka, a powerful Jedi, and found himself physically bested. Instead of trying to win a fight he could not win, Maul relied on his cunning — he retreated to his ship, built two lightsabers and welded them together. This allowed him to surprise and defeat the Jedi.

What Is the Name of Darth Maul’s Lightsaber?

While it doesn’t have a unique name, Darth Maul’s lightsaber is sometimes called a saberstaff because of the length the hilt requires to accommodate its dual blades.

Legends canon tells that Darth Sidious wanted Maul to name his lightsaber, believing it would become a legendary weapon. However, Maul balked at the idea, insisting that his lightsaber was nothing more than a tool of destruction — like him.

The Evolution of the Original Darth Maul Double-Bladed Lightsaber

The original Darth Maul lightsaber was the double-bladed one seen in The Phantom Menace (cue “Duel of the Fates”) for what seemed like the first and last time. However, Maul’s shocking return also meant the return of this lightsaber (or part of it). 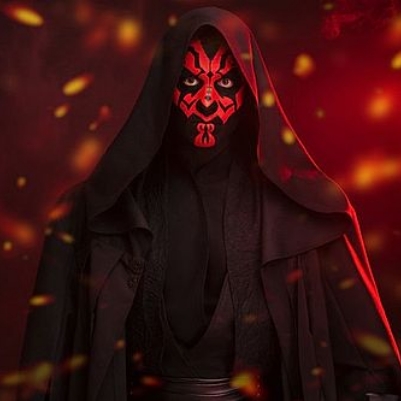 The first Darth Maul lightsaber hilt was, as mentioned, two hilts forged together, making it about 49.5 centimeters long with a blade extending from each end. Made of alloy metal, it’s a rather simple design with black accent markings and red buttons. It is a red lightsaber, as it is standard for a Sith Lord to wield a red saber.

The Battle of Naboo

The Phantom Menace features the Battle of Naboo, during which Maul fights Qui-Gon Jinn and Obi-Wan Kenobi. Darth Maul’s lightsaber skills are impeccable, and he’s able to kill Qui-Gon Jinn. However, the shock of this sends Obi-Wan into a rage. Obi-Wan uses advanced lightsaber moves to beat Darth Maul, cutting his lightsaber — and him — in half. Maul and his lightsaber plummet down the reactor shaft, chopped in half and left for dead.

The Son of Dathomir Returns

Shockingly, The Clone Wars reveals that Darth Maul survived his duel with Obi-Wan, saved by Savage Opress — his brother. Maul heals and crafts robotic legs to walk again. Savage even recovered Darth Maul’s lightsaber (half of it) and gives it back to him. Now a single-bladed lightsaber, Darth Maul uses the weapon to gain power in the criminal underworld, forming the Shadow Collective.

Maul (he’s technically not “Darth” by this point, having been replaced as Sidious’ apprentice by Count Dooku and later Darth Vader) swears vengeance on both Obi-Wan Kenobi and his former master, Darth Sidious. He has a rematch with Obi-Wan during the Clone Wars era, and he even confronts Darth Sidious, though he is bested and loses both his lightsaber and the Mandalorian Darksaber that he’d acquired while consolidating power.

The Return of the Dual Blades

Darth Maul gets his lightsaber (along with the Darksaber) back and crafts an additional one to forge to its end. During the Siege of Mandalore, he uses this double-bladed lightsaber to fight Ahsoka Tano. While Ahsoka shows him mercy and doesn’t kill him, Maul’s original lightsaber falls and is forever lost.

After the end of the Clone Wars and the dawn of the Galactic Empire, Maul crafts a new double-bladed lightsaber. You could say this is Darth Maul’s second lightsaber, as he’d previously used different versions of his original. This is the lightsaber Darth Maul wields in Star Wars Rebels and Solo: A Star Wars Story.

Darth Maul’s new lightsaber is a significant change from the original, with a hooked grip-guard similar to those of the Inquisitors, possibly having been built from the scraps of an Inquisitor’s lightsaber. It still produces two red blades — or perhaps “crimson” is a more apt description, as he takes control of the Crimson Dawn criminal organization while using it. Maul would conceal the hilt with wood, using it like a walking stick in public.

Star Wars Rebels features the final confrontation between Maul and Obi-Wan Kenobi. Ever consumed by vengeance, Maul tracks Obi-Wan down. Darth Maul’s lightsaber is cut in half once again, and he is defeated once and for all.

In the canon comic book Star Wars: Age of Republic – Darth Maul, the dark side of the Force gives Maul a vision of himself as a Jedi. While this is a dream sequence, it gives us a rare opportunity to see Darth Maul wielding a double-bladed blue lightsaber.

Maul is one of the few characters known to have wielded the Darksaber, a rare distinction.

What Lightsaber Form Does Darth Maul Use?

Darth Maul’s lightsaber form is the aggressive Form VII: Juyo, also called the “Ferocity Form.” He also draws on Jar’Kai, the method of dual wielding or carrying a double-bladed lightsaber. For Darth Maul, dual lightsaber skills are crucial, and when combined with Juyo, he’s incredibly violent and unpredictable.

“You may think I am evil. I am not. I am efficient.” —Darth Maul

Harness Your Power With a Custom Lightsaber

If you want a double-bladed lightsaber, Darth Maul doesn’t have to forge it for you. You can craft a custom lightsaber of your own right here, featuring the highest quality materials and electronics in this or any galaxy. Find yours today.

Red Lightsaber History and Lore To understand the role of lightsaber colors, we must first understand where the color originates from. Color comes from lightsabers…
What Is the Meaning of the Red Lightsaber? Red lightsabers are notorious in Star Wars as a weapon carried by the most villainous of characters…
The History of Double Blade Lightsabers The lightsaber is an undeniably impressive weapon, not only due to its imposing appearance…