One cannot understate the importance of the legacy of Luke Skywalker. Lightsaber lore aside, it’s Luke’s journey that introduced audiences everywhere to the galaxy far, far away in Star Wars (later to be subtitled Episode IV – A New Hope). The lightsaber Luke has at every point represents his journey, from his training to become a Jedi in the original trilogy to his experience as the last Jedi in the sequel trilogy.

Luke Skywalker’s lightsaber is pure Star Wars iconography, whether the color is blue or green (or even yellow). Join us as we discuss every lightsaber Luke has had in the Star Wars saga, from his farmboy days bulls-eyeing womp rats on Tatooine to his final stand at the Battle of Crait.

What Color Is Luke Skywalker’s Lightsaber?

One could argue that the only true Luke Skywalker lightsaber color is green since that’s the only one he constructs himself.

Luke trains with this lightsaber in A New Hope, and he later uses it to duel Darth Vader on Bespin in The Empire Strikes Back. Vader toys with Luke to gauge his abilities, and even though he retains the upper hand, he may have underestimated young Skywalker, who shows significant prowess with his lightsaber despite having cut his training short. Still, the dark lord of the Sith has control, eventually cutting off Luke’s hand and revealing that he’s his father. Luke’s lightsaber, along with his hand, falls into the reactor shaft below as he cries out in physical and mental agony.

In the sequel trilogy, Rey eventually uses the Luke/Anakin Skywalker lightsaber, and she tries to give it back to Luke, now an old man in exile on Ahch-To. While he initially rejects it, we see Luke wield this weapon once again (sort of) in his standoff against his nephew Kylo Ren during the Battle of Crait in Episode VIII – The Last Jedi. Luke is actually Force-projecting himself to Crait while physically still on Ahch-To — the last thing he does before passing away into the Force, an act that gives the Resistance a fighting chance against the First Order. As for why Luke uses his blue lightsaber instead of green in this projection, he knows it will impact Kylo Ren, who believes the Anakin Skywalker lightsaber should belong to him.

The original Luke Skywalker lightsaber hilt was a prop created from a Graflex camera flash tube. Canonically, it’s 28 centimeters long and made of alloy metal and carbon composites. It features black ridges on the handle, a blue kyber crystal and an adjustable blade length.

In Episode VII – The Force Awakens, we see that the Luke/Anakin Skywalker lightsaber has wound up in the care of Maz Kanata at her castle on Takodana. It calls out to Rey, but she initially refuses to take it. Finn, the reformed Stormtrooper, takes it and uses it to duel Kylo Ren, who is enraged at the sight of his grandfather’s weapon. Ren bests Finn, but Rey picks up the lightsaber and holds her own when dueling Ren. As for how Maz Kanata got Luke’s lightsaber, she says that’s “a question for another time,” though it’s revealed in the 2020 Star Wars comic that an Ugnaught recovered it from Cloud City. 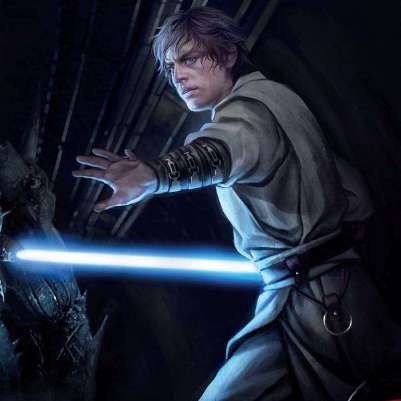 Seen only in the canonical Star Wars comic book series (so far), Luke Skywalker has a yellow lightsaber between the events of The Empire Strikes Back and Return of the Jedi. He discovers it in an abandoned High-Republic-Era Jedi outpost located on Tempes in the Outer Rim. Luke uses this lightsaber to duel the spirit of the Grand Inquisitor and defend himself while hunting for Boba Fett, who had captured Han Solo.

Luke Skywalker’s green lightsaber is possibly his most iconic — because it belongs to him and him alone. First seen in Return of the Jedi (ROTJ), this is the lightsaber Luke constructs for himself when he fully becomes a Jedi Knight. Luke’s ROTJ lightsaber pops out of R2-D2 when he rescues Han Solo from the clutches of Boba Fett at Jabba’s palace, giving audiences their first glimpse of a green blade on screen.

Luke’s green lightsaber also clashes with Darth Vader’s lightsaber in their rematch on the second Death Star, his father commenting on its construction. Luke stops short of killing Vader, edging too close to the dark side, and ultimately redeems him instead.

This is also the Luke Skywalker lightsaber in The Mandalorian and The Book of Boba Fett, which take place after ROTJ, where we see him destroy dark troopers to rescue Grogu and train him. As witnessed in Episode IX – The Rise of Skywalker, Luke uses his green lightsaber when training his sister, Leia. In The Last Jedi, we see a flashback of Luke after he’d begun to train new Jedi. With his green lightsaber, Luke has a vision of his nephew and Padawan Ben Solo turning to the dark side, and for a fleeting moment, he considers killing him. This terrifies and angers Ben, who destroys the Jedi temple and becomes Kylo Ren. The fact that Luke has his green lightsaber in this moment of great shame is probably another reason he chooses the blue one for his redemption at Crait.

Luke models this hilt on Obi-Wan Kenobi’s lightsaber in tribute to his master, though the design is streamlined. With a green kyber crystal, this Luke Skywalker lightsaber hilt is 28 centimeters long and made from alloy metals and a variety of salvaged materials.

How & Where Did Luke Get His Green Lightsaber?

Luke constructed his green lightsaber himself. It’s thought that Obi-Wan and Yoda taught him very little about using the Force for lightsaber construction, but Luke was able to use the Force to gain the knowledge on his own — and get the necessary parts. A deleted scene shows Luke with the ROTJ lightsaber shortly after crafting it, igniting the blade for the first time.

How Did Luke Make His Lightsaber?

After passing away and becoming one with the Force, the native Caretakers on Ahch-To retrieved Luke’s green lightsaber and stored it with his other possessions. This is revealed in The Last Jedi: Expanded Edition novel. The possibility remains for later appearances of Luke Skywalker’s green lightsaber in the new canon.

What Lightsaber Form Does Luke Use?

For Luke Skywalker, lightsaber form developed naturally from his instinctual expertise with the weapon and his experiences dueling with his father. Like Anakin Skywalker, Luke uses Form V: Shien & Djem So, parrying and blocking blaster fire.

“I’m a Jedi, like my father before me.” —Luke Skywalker

Are you ready to embrace the power of the Force? Craft your own custom lightsaber today. We offer a wide range of customization options for lightsabers that can be used for cosplay, display or real dueling. It’s time to fulfill your destiny.

Three Most Recognizable Single Blade Sabers To build your own lightsaber is a highly personal process that expresses and complements the individual’s deepest values, including the nature of their connection…
Which Star Wars Characters Use Green Sabers? With so many lightsaber colors in the Star Wars universe, it can be difficult to recount which character wields which saber. In this series of articles, we will be discussing…
What Planet Is Luke Skywalker From? Jedi Luke Skywalker fought in the Galactic Civil War, worked to defeat the Galactic Empire, and forged a path for the New Republic and the New Jedi Order…