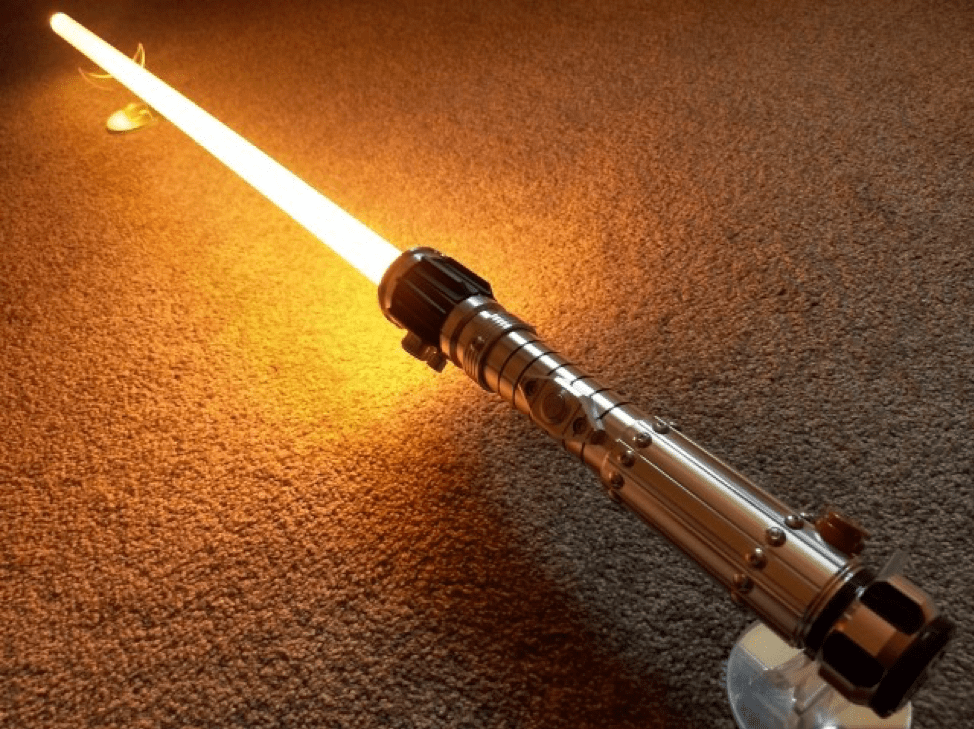 Which Character Wields a Yellow Lightsaber?

Among all the lightsaber colors in the known Star Wars universe, yellow is one of the most uncommon—but it recently became less uncommon with the release of The Rise of Skywalker. The ending of TROS features the first sighting of an actual yellow lightsaber in the entire nine-episode theatrical series that began back in 1977. It can be seen in the hand of Rey—or “Rey Skywalker,” to use the name she chose for herself in honor of her mentors—as she flicks it on in rather dramatic fashion during her visit to Luke’s old hometown on the desert planet Tatooine.

It’s a big moment that the filmmakers surely knew would inspire discussion among fans. Not only does Rey finally have her own lightsaber (one that activates with a cool rotating ring mechanism), it emits a blade with a yellow coloration. Because this event occurs at the very end of the movie, the audience is left with no real explanation about how the lightsaber came into being or what its significance might be. What is well established, however, is that Star Wars lightsaber colors are never random.

What Rey’s yellow lightsaber means is only speculation at this point, but it’s possible to make some educated guesses by taking a look at other appearances of the yellow lightsaber, in both the canon and non-canon history.

Past Appearances of the Yellow Lightsaber

The yellow lightsaber has never been widely seen, but it does have a significant history behind it, albeit a history that has been partly pushed into non-canon status. Here are a few past sightings of yellow lightsabers:

In addition to the above, Ahsoka Tano is widely credited with using a short yellow lightsaber, or shoto, during the Clone Wars, but some commentators have pointed out that its coloration is really yellow-green. If so, Ahsoka’s saber should not be judged to have the same symbolic significance as a true yellow lightsaber.

The Future of the Yellow Lightsaber?

Due to the events of The Rise of Skywalker, the yellow lightsaber is likely to become chiefly linked to Rey. It remains to be seen what the future holds for Rey and her newly created saber, but there is no doubt that yellow has always been associated with the Jedi cause. In all likelihood, it will remain so. But it’s also likely that Rey’s influence will eventually expand the meaning of yellow as a lightsaber color.

Perhaps it is not a coincidence that the color yellow is situated between green (the Jedi color) and red (the Sith color) on the visible spectrum and stands closer to the former than the latter. That would certainly befit an individual who is a blood relative of the odious Palpatine but rejects everything he stood for.

To discuss these and related matters with like-minded fans, please visit SaberForum.com. Feel free to contact UltraSabers with any questions you may have about the products available through this site.