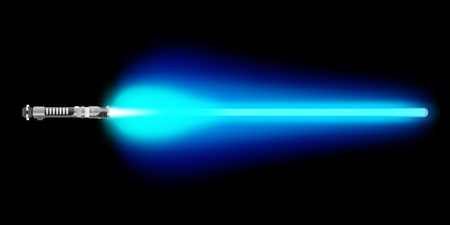 Lore & History Behind the Blue Lightsaber

“An elegant weapon for a more civilized age.” – Obi-Wan Kenobi

Lightsabers are weapons used by the Jedi, Sith and other Force-sensitives in the world of Star Wars. Lightsabers consist of a metal handgrip and a powerful blade which beams energy created by crystals. Lightsabers can not be used by just anyone. They require special skills, training, and synchrony with the Force. Although used by both the Jedi and Sith, lightsabers were originally used by the Jedi.

Lightsabers have been in use for thousands of years before the age of the Republic and have been used in the Battles of Rashfond and Peacekeeping of Parliock. They became more relevant in the Clone Wars when Jedi Generals began using lightsabers more often. Lightsabers can be used for both offense and defense. They have the power to cut through anything and can only be blocked by weapons made from energy materials. After the Clone Wars ended and the Jedi Purge began, the lightsaber became a rarity. The Jedi’s, who used lightsabers the most, were slowly diminished and stopped using lightsabers in fear of drawing attention to themselves.

Darth Vader used lightsabers for the majority of the reign of the Empire, but as the Empire began to diminish, Luke Skywalker took back control of lightsabers. Luke started training new Jedi, but once again, they were defeated by Darksiders. The ongoing battle between the Sith and Jedis and the use of lightsabers created turmoil in the galaxy. Lightsabers have been used for both good and evil and have played a prominent role in Star Wars history.

The blue lightsaber was first wielded by Anakin Skywalker during the Clone Wars and later fell into the hands of Luke. Since then it has been passed down to various Jedis.  The reminder of the article will discuss the lore of blue lightsabers and the Jedi Guardians who wield it.

The Guardians are the group of Jedi who most often wielded a lightsaber with a blue blade as a representation of a more physical level and their commitment to justice. These Jedi honed their craft in the art of war, dedicating their life to martial training and combat.  As a result, these Jedi engaged in the most combat of the three Jedi classes. While there are many levels of the Guardian class, the most skilled were dubbed Warrior Master. History tells us that two blue lightsaber-wielding Warrior Masters joined two green lightsaber-wielding Sage Masters in the founding of the Jedi Temple on Coruscant.

The sub-branches of the Jedi Guardian included the following career paths:

The kyber crystal is the most commonly used crystal when building a lightsaber.  Here, we will provide an overview of the unique abilities three other rare crystals had that powered blue lightsabers.

Also known as the Ankarres Sapphire, this crystal was capable of healing powers and numerous other effects. Antares Crystals were among the most potent crystals used in lightsaber creation.  Across the galaxy, the legend is that only beings attuned with the Light Side of the Force could use it. If the lightsaber or crystal came in contact with a Dark Sider, the temperature would rise and burn the wielder’s hand.

Mantle of the Force

Considered one of the rarest crystals, the Mantle of the Force was a powerful crystal that produced a blueish, cyan color.  It was discovered that when the Mantle of the Force was placed in a lightsaber, its properties were altered depending on the other crystals that were included in the makeup of the saber.  It made the weapon and crystals stronger, while also enhancing the Force abilities of the Light Side attuned being that brandished it.

If the frigid name didn’t give it away, this crystal can be harvested on the planet, Hoth.  When used in a lightsaber, it emits an icy blue color. When the Permafrost crystal was tuned by a Force-sensitive being, it became a focusing crystal that could only be sued in lightsabers constructed by the individual who tuned it.