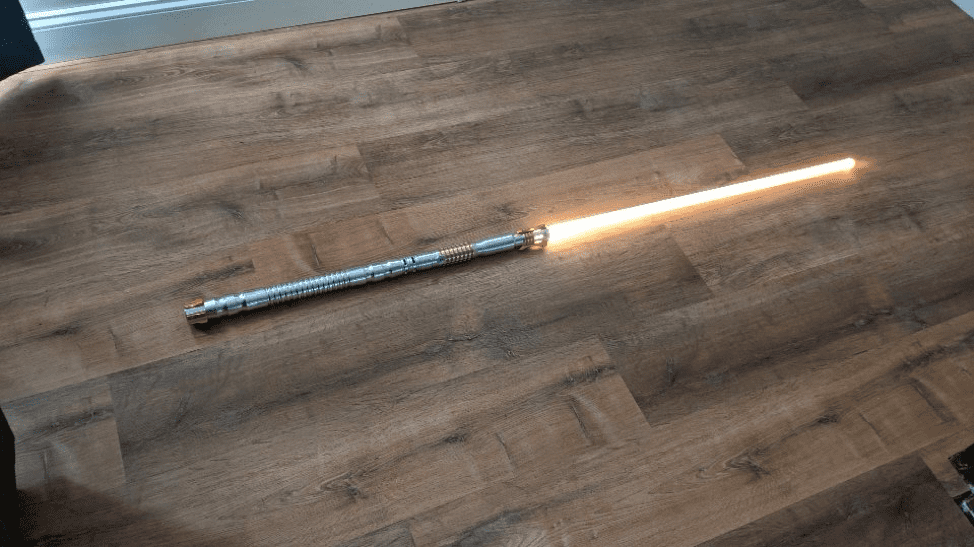 What Is the Meaning of the Yellow Lightsaber?

Yellow lightsabers have always been linked to the Jedi, whether you’re talking about accepted canon or about the non-canon Legends. It is true, however, that a yellow lightsaber has been occasionally seen in the hands of individuals outside the Jedi Order, specifically in the case of Asajj Ventress, the notorious bounty hunter. But it’s worth pointing out that Ventress bought her lightsaber on the black market. She did not create the lightsaber, and her use of it can be attributed to happenstance rather than any symbolic importance. Therefore, yellow can be classified without reservation as one of the colors of the Jedi.

Yellow Lightsabers in Canon and Legends

In current canon, the yellow lightsabers are associated with the Jedi Temple Guard, who, as the name implies, were charged with the sacred task of protecting the temple of the Jedi Order on Coruscant. The Jedi Temple Guard, who wore masks to remain anonymous, carried yellow lightsaber pikes—a type of saber with a long hilt and a blade emitting from each end.

If you reach back into the shadowy (and non-canonical) realm of Legends, you encounter another type of Jedi who utilized the yellow lightsaber: the Jedi Sentinel. The Sentinel represented one of the three “schools” of Jedi, the others being the battle-ready Guardians and the diplomatic-minded Consulars. Sentinels occupied the position between those two other types of Jedi, taking inspiration from both and giving themselves latitude to fight, negotiate, or keep watch as the occasion demanded.

Sentinels were realists, not ideologues. They were fond of learning handy skills that did not require Jedi training, like repairing machinery or administering medicine. While the Guardians and the Consulars might call upon the Force to fix a broken vehicle, the Sentinels were far more likely to grab a screwdriver and go to work.

Recent Revelations with the Yellow Lightsaber

So what should we make of all this? What do yellow lightsabers mean? The events of The Rise of Skywalker have recently expanded the canon of the yellow saber. To be specific, the final moments of the film depicted Rey with a brand-new yellow lightsaber in her hand. This is an interesting development for a number of reasons.

Rey’s yellow blade may be reasonably said to symbolize nothing more than her ascension to a new phase in her life—a way to break away from the past. But if that’s the case, why is her lightsaber yellow? Why not a color that has no history in the Star Wars universe? As we’ve seen, the color yellow already occurs in canon and has a set of specific associations.

It may symbolize Rey’s ability to manage and harmonize all the conflicting influences within her—as a granddaughter of Palpatine who now claims the Skywalker name—that have brought her to this present station in life, while keeping her squarely in the Jedi camp. This is similar to the philosophy of the Jedi Sentinel. Like those practical Sentinels of legend, Rey isn’t afraid to get her hands dirty—she’s a former scavenger, after all.

And like the Jedi Temple Guard, Rey is now in the position of acting as the protector of the Jedi cause—not in the literal sense of standing at a gate with a pike in her hand, but in the sense that she’s the most important figure involved in the continuance of the Jedi way.

In summary, the meaning of the yellow lightsaber is difficult to pin down in a few words. Among other things, it represents balance, practicality, and a certain level of independence from the mainstream of Jedi life. But as recent events indicate, we probably haven’t seen the last of the yellow saber, and Rey could go on to show the entire galaxy what it really means.

Fans of the yellow lightsaber can find their own in UltraSabers’ large inventory of products and accessories. Don’t hesitate to contact UltraSabers if you have any questions about their inventory.