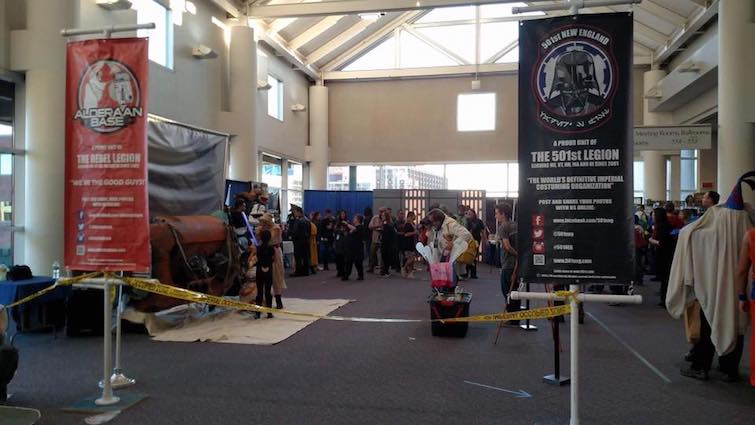 The name “501st” is no stranger to the screens at Ultra Sabers HQ. It seems like every day stories of the 501st pour in, ranging from storming children’s hospitals in events for the Make a Wish Foundation, to their fundraising for amazing causes at conventions. An infectious air of grace and humility surrounds & follows the troops wherever they go, and they leave a wake of excitement and stories in their path.

The group bearing the name of Vader’s most elite troops are networked all over the world, and their factions boast some of the highest numbers in the Star Wars community. They are made up of complete strangers who are brought together not only for their love of Star Wars, but more importantly; their desire to make a difference in their community.

In the early months of 2016, a member of the 501st New England Garrison became one with the Force after losing their war with cancer . With the news of his passing, the troops set themselves a goal to raise $5000 to be donated to the Dana-Farber Cancer Institute in his name. On November 14th, with the support of their comrades from Alderaan Base, the ghostly soldiers and knights proudly announced that they were able to raise $10,000 for the donation in memory of their fallen.

There are a lot of groups out there, doing a lot of great things. But the 501st show a depth of camaraderie and passion for both their work, and their garrison that is unrivaled, and we here at Ultra Sabers salute and congratulate them on an extremely inspiring accomplishment.

May the Force be with you all.

We’ve been called magical before, but this time it’s a bit different… Welcome to Disney World, the land full of princesses and fairies where all your dreams come true, like taking on Darth Vader and the Dark Side in one on one combat!! When Disney acquired the rights to Star Wars by purchasing LucasFilm, several […]

The most sinister bounty hunters on the streets coming at you with the funkiest of beats. The team at Infectious Designer has unleashed the galaxy’s most feared duo, Darth Punk, with a bit of a remix! Armed with the Wompa Stompa mixtape and their fearless Gonk droid, Daft Vader and Boba Funk are on the […]