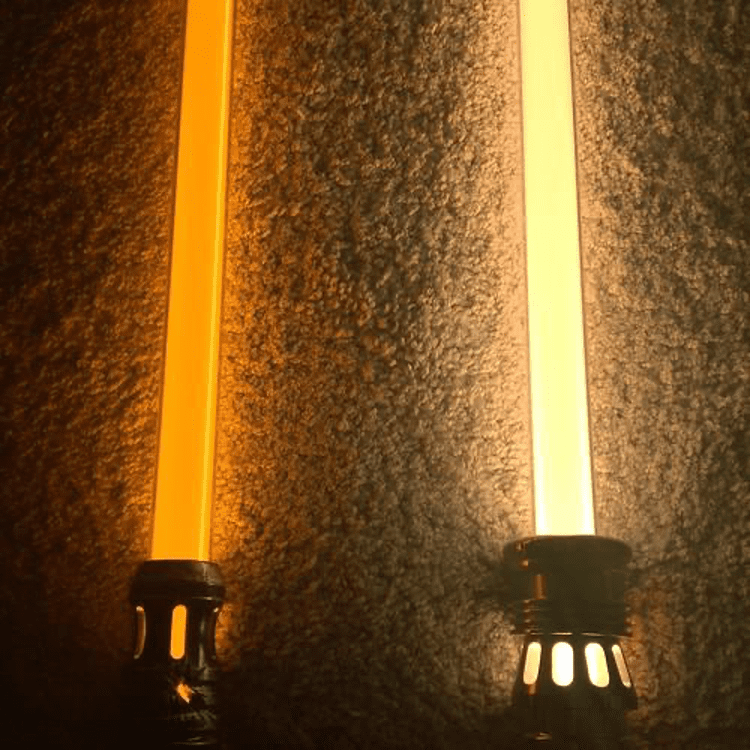 Why Is Rey’s Lightsaber Yellow in Rise of Skywalker?

Now that Star Wars Episode 9: The Rise of Skywalker has completed its impressive run at the box office (to the tune of $1.07 billion in ticket sales) and the film has become readily available through various home-viewing formats, the time has come to discuss a certainly spoilery moment revealed at the finale of the film. This is, of course, the moment when Rey Skywalker turns on her new-found lightsaber—which has a yellow blade. As any fan knows, yellow lightsabers are extremely uncommon in the Star Wars universe.

It is the final dramatic beat of a nine-film movie series that took over forty years to reach its final installment (although it certainly does not mark the end of the Star Wars saga). Therefore, it has inspired a lot of discussion about what it’s supposed to signify when Rey’s lightsaber turns out to have a plasma blade that is colored yellow, one of the rarest hues that can be seen coming out of a lightsaber hilt. What does that mean? There are some important clues that may reveal the mystery.

A Brief History of Yellow Lightsabers

It has been widely speculated that Rey’s lightsaber is intended to suggest some kind of affiliation with these Jedi-associated personages. However, there is evidence that Rey’s yellow lightsaber isn’t entirely intended to evoke established Star Wars lore.

What Is Known About Rey’s Lightsaber

Fortunately, the special-effects design team on The Rise of Skywalker has stepped up to shed some much-needed light on this particular topic. In an article posted on Insider.com, visual effects supervisor Roger Guyett revealed that the yellow lightsaber was created out of a desire to give Rey “a very unique color” as well as one that projected “an optimistic kind of quality.” Patrick Tubach, another visual effects supervisor, voiced similar sentiments, claiming that the yellow coloration was intended to suggest qualities like “golden and sun and optimism.” Tubach also confirmed that the crystal in Rey’s lightsaber is supposed to be genuinely yellow rather than another type that was somehow purified into its present state.

So it seems that Rey’s yellow lightsaber is mainly intended to offer a peek into the future rather than reference the past. That is certainly appropriate for a film series that, at least in its final installments, emphasizes the need to abandon the old and embrace the new.

Anyone interested in discussing lightsaber lore is invited to join the thriving community at SaberForum.com. If you have a question about Ultrasabers’ lightsaber accessories for sale, you can always contact them and they will respond ASAP.