Partly because of the unmistakable presence of actor Samuel L. Jackson and partly because of the character’s prowess and strict adherence to the code of the Jedi Order, one of the most enduringly popular Jedi of the prequel era has to be Mace Windu. Purple lightsaber aside, Mace Windu carries a strength and determination nearly unmatched in the Star Wars universe. That said, Mace Windu’s lightsaber is iconic — and a significant part of his appeal.

Join us as we explore the details surrounding the Jedi weapon of Mace Windu: lightsaber color, origin, hilt design, form and more.

What Color Is Mace Windu’s Lightsaber?

Although most people would say “purple,” the kyber crystal that colors Mace Windu’s lightsaber blade is technically amethyst. Purple lightsabers are not common in the Star Wars universe, and Mace Windu is one of the only wielders in current official canon.

Legends canon featured a few purple lightsaber wielders, including An’ya Kuro, Jaina Solo Fel and Revan. (Note: Technically, Revan has been re-canonized by the Shadow of the Sith novel and The Rise of Skywalker: The Visual Dictionary reference book, referenced only in connection with the Sith Eternal army; there is no reference to the purple lightsaber Revan wielded as a Jedi, as seen in the Knights of the Old Republic video game.)

How Did Mace Windu Get a Purple Lightsaber?

Droid professor Huyang aided in the construction of Mace Windu’s purple lightsaber when he was a young Jedi Initiate, as Mace struggled to get the pieces to fit together. Huyang simply reminded Mace to let the Force bind the pieces through him — and that the Jedi is the weapon, not the lightsaber. This was Mace Windu’s first lightsaber hilt, though his second, final one was nearly identical as he’d made it to the highest possible standards.

This is the only explanation for the construction of Mace Windu’s lightsaber in current canon, though Legends had some further tales, explaining that a young Mace received purple kyber crystals as a gift from the inhabitants of planet Hurikane after saving one of their kind. It’s possible that this story, or something like it, could be canonized in the future.

Why Does Mace Windu Have a Purple Lightsaber?

However, there is a simpler behind-the-scenes explanation: Samuel L. Jackson requested that Mace Windu have a purple lightsaber. While we’d seen Mace Windu in Episode I – The Phantom Menace, his lightsaber didn’t appear until Episode II – Attack of the Clones, which features the Battle of Geonosis, the first battle of the Clone Wars. The scene has many Jedi on screen at once, and Jackson wanted to be able to spot himself easily. He reasoned that Mace Windu was “the second baddest Jedi in the universe” (next to Yoda) and could therefore have whatever color he wanted. George Lucas allowed it, and the rest is history. Since Lucas didn’t make the decision until production on Attack of the Clones, the Phantom Menace action figure of Mace Windu had a blue lightsaber. 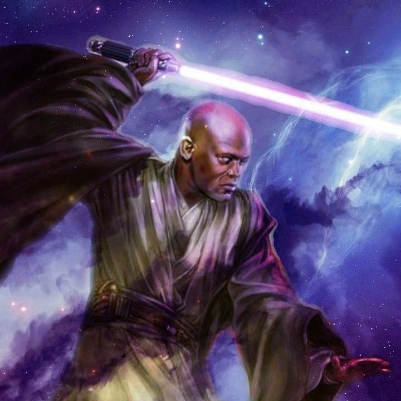 Mace Windu’s lightsaber hilt is about 28 centimeters in length. It has a cylindrical design with black accents. Additionally, the final lightsaber hilt Mace Windu has when he’s on the Jedi Council (as seen in the prequel films) features gold-colored detailing that comes from an electrum finish. Electrum is a sign of status, as it is only allowed for senior members of the Council.

*WARNING: Minor spoilers for the recently released Tales of the Jedi below*

In the Tales of the Jedi episode “Choices,” we get our first real glimpse at Mace Windu’s original lightsaber hilt with no gold electrum detailing, as we see the young Jedi on a mission with Dooku just before he accepts a seat on the Jedi Council. He likely modded the hilt shortly after joining the Council, though it has the same superior construction.

What Is Mace Windu’s Lightsaber Form?

Mace Windu’s lightsaber form is Form VII: Vaapad. Mace developed the Vaapad variant himself and is a master of the form. Among the Jedi, Form VII (especially the original Juyo variant) was considered one of the most aggressive and dangerous lightsaber forms. It draws on the user’s rage and other negative emotions, leading some practitioners to the dark side. As a result, the Jedi banned the use of the form — but the Sith continued using it.

Mace Windu developed Vaapad to allow the Jedi to utilize this powerful technique while maintaining control over their emotions. However, knowing the danger it posed, Mace only taught Vaapad to select Jedi who he felt could handle it.

“The oppression of the Sith will never return.” —Mace Windu

Secure Your Destiny With a Custom Lightsaber

Looking for a purple lightsaber like Mace Windu? Or a lightsaber that’s red like Darth Vader’s? No matter what color or hilt style you desire, you’ll find the best custom lightsabers here.

What is the Meaning of the Purple Lightsaber? Purple Lightsabers are among the most mysterious color lightsabers known in Star Wars. They were carried far less often than their green, red, yellow…
Which Star Wars Characters Wield Purple Sabers? With so many lightsaber colors in the Star Wars universe, it can be difficult to recount which character wields which saber. In this series of articles, we will…
Purple Lightsaber Lore & History To understand the role that each saber plays we must first understand where the color originates from. Color comes from cyber crystals. The crystal is at the core of the lightsaber and the color…