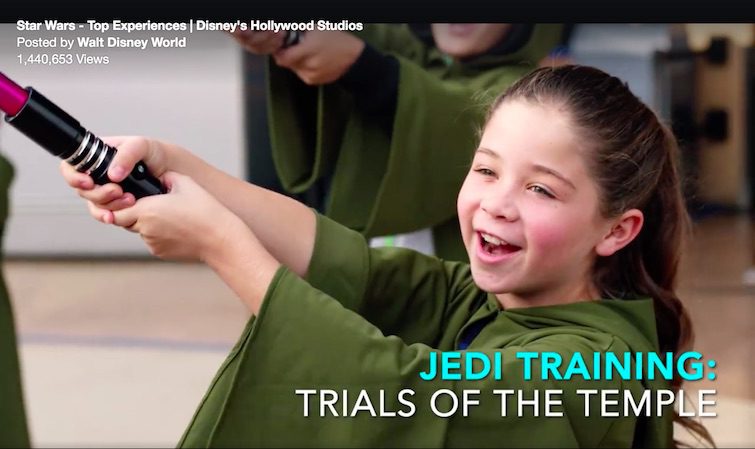 We’ve been called magical before, but this time it’s a bit different…

Welcome to Disney World, the land full of princesses and fairies where all your dreams come true, like taking on Darth Vader and the Dark Side in one on one combat!!

When Disney acquired the rights to Star Wars by purchasing LucasFilm, several changes appeared in the Mouse’s Magic Kingdom; from rides, to galleries, to characters walking the park, to interactive exhibits and shows for kids of all ages! Of the new attractions, The Jedi Temple, quickly became one of the most popular, allowing children to train in the ways of the force (without fear of being a casualty of the “chosen one” during order 66, which we really appreciate and can get behind).

Starting in late 2015, Padawans beginning their Jedi Training in the Trials of the Temple event may find themselves wielding a saber proudly crafted by us here at UltraSabers.com in their fight against the Seventh Sister of Disney’s “Star Wars Rebels” TV Series.

For years, we at UltraSabers have been one of the front runners in pioneering the industry of custom lightsabers. Many of our materials and practices have become standards among sabersmiths worldwide, and the strides and progress we have made have allowed us to produce a product that we unquestionably stand behind. We are extremely proud and humbled to have been chosen to be a part of the magic of the Disney Kingdom, and we are thrilled to see the reactions of each person wielding one into battle.

The name “501st” is no stranger to the screens at Ultra Sabers HQ. It seems like every day stories of the 501st pour in, ranging from storming children’s hospitals in events for the Make a Wish Foundation, to their fundraising for amazing causes at conventions. An infectious air of grace and humility surrounds & follows […]

The most sinister bounty hunters on the streets coming at you with the funkiest of beats. The team at Infectious Designer has unleashed the galaxy’s most feared duo, Darth Punk, with a bit of a remix! Armed with the Wompa Stompa mixtape and their fearless Gonk droid, Daft Vader and Boba Funk are on the […]