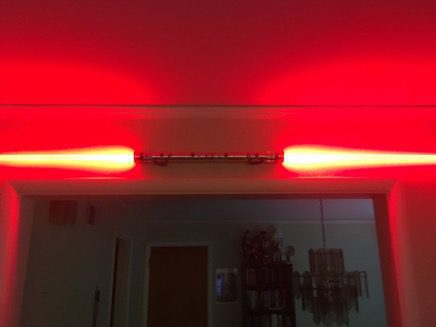 The History of Double Blade Lightsabers

The lightsaber is an undeniably impressive weapon, not only due to its imposing appearance but also its ability to cause major damage to foes on the battlefield. The prototypical lightsaber conforms to the single blade design, where a plasma blade protrudes from an emitter attached to one end of a hilt. But as every Star Wars enthusiast knows, some lightsabers deviate from the standard model. One of the most eye-catching of these alternative designs is the double blade lightsaber, an uncommon variant with an interesting history that we will delve into below.

What Is a Double Blade Lightsaber?

The double blade bears a strong resemblance to another staff weapon, the lightsaber pike (or lance), which is characterized by a long handle that can be configured to emit a blade at each end. Combat techniques associated with these two weapons are very similar.

The double blade lightsaber has a number of alternate names, including saberstaff, doublesaber, and dualsaber.

The Double Blade in Action

In combat, the dual lightsaber calls for a unique approach to offense and defense. Many movements and attacks commonly used with the single blade saber cannot be safely or effectively employed by the wielder of the double blade. An inexperienced combatant could even accidentally skewer themselves. Learning how to use a double blade lightsaber isn’t easy, and that’s one of the reasons why this weapon is rare in the Star Wars universe.

However, the double blade saber does have multiple advantages. It allows for a high rate of attack that often overwhelms opponents with its ferocity. While it isn’t especially well suited for thrusting strikes, its forceful sweeping attacks can and do produce a lot of damage. Additionally, the scarcity of this weapon frequently enables the user to benefit from the element of surprise, as relatively few individuals have experience defending against it in battle.

Early Days of the Double Blade

The dual lightsaber is believed to have been invented by the Dark Lords of the Old Sith Empire. Its first notable appearance was in the Great Sith War when Exar Kun, the one-time Jedi Knight, used it to lead his Brotherhood of the Sith into battle. It was essentially a modified single blade lightsaber with a second blade emitting from the other end. Kun’s double blade lightsaber proved to be extremely effective against the Jedi Order, who had never seen such a weapon, and even his former Jedi Master Vodo-Siosk Baas was no match for it in one-on-one combat against him.

Kun was later vanquished by the Jedi during a pitched battle on Yavin 4, and his lightsaber was lost. The Jedi Covenant made it a mission of theirs to recover this powerful weapon; eventually, Jedi Master Celeste Morne succeeded in locating it. From there, the weapon found its way into the hands of Jarael, an Arkanian, who used it in battle against her nemesis, Chantique. Chantique herself soon obtained the weapon, only to lose it to her hated father, Antos Wyrick (Demagol). A later confrontation between father and daughter ended fatally when the unusual weapon activated unexpectedly, instantly killing both. After all these tumultuous events, Kun’s double blade lightsaber was safely returned to the Jedi.

The Jedi, no doubt inspired by the effectiveness of this exotic weapon, began using the double blade lightsaber. The Jedi Civil War found both Jedi and Sith wielding it in combat. It became common weaponry among Jedi Consular and Sith Inquisitors alike.

Nonetheless, the overall influence of this powerful weapon remained fairly limited, and over time the dual lightsaber again fell into obscurity. It would remain so until the design was revived by Darth Maul, whose red double blade lightsaber soon became notorious throughout the galaxy. Other wielders of the double blade lightsaber during the Clone Wars era include Asajj Ventress, General Grievous, and Darth Zannah.

The weapon again fell out of fashion, with only rare sightings until Luke Skywalker established the New Jedi Order.

Interested in getting your very own double blade lightsaber? Come to Ultrasabers for the weaponry and accessories you need at a price you can afford.