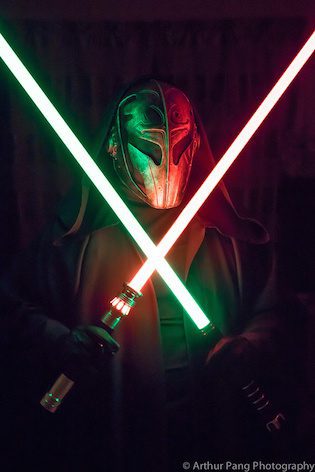 How to Make a Lightsaber

Proud of your custom UltraSaber? What is probably the pinnacle of your armory and showpiece of your collection may speak more about you than you think…

Over the years, we’ve crafted and dispatched tens of thousands of custom lightsabers to some of the best fans, duelists and cosplayers out there. Pair that with our outstanding seats in the SaberForums, where we watch words of wisdom and input fire back and forth through cyberspace from thousands of you diehard saber owners, as well as the overwhelming number of you that send in pictures of yourselves with your sabers in action, and top it off with the notes, suggestions, schematics, and drawings that get posted or sent in daily of your “dream sabers,” and you could say that we at Ultrasabers have quite the view on just what each saber says about its owner.

We all know that the lightsaber is the chosen weapon of those who wield the force, be they Jedi Knight or Sith Lords. Each saber is meticulously and delicately handcrafted by its carrier as they pour their knowledge of the force into its crystal, imbuing it with power and prayer. Through battle and use the weapon is perfected or tarnished, gaining a personality and appearance reflecting the lifestyle chosen by its master. The wielder of the Force’s path is formed through their desires as they manifest in choices of just how to wield its vast power. The Jedi Knights, who ignite their blade to defend and protect those who cannot defend themselves, fighting to preserve all life; and the Sith, who train in the Dark Side of the force, emotionally fighting for power brought on by sorrow, jealousy, or anger, often for a selfish gain.

But where does it begin? How does a Sith or Jedi begin to craft their saber? We’re so glad you asked.

It’s time for us to break down the parts of a lightsaber, and teach you how to make your own lightsaber to wield in the battle for the galaxy’s destiny.

The Color of the Blade