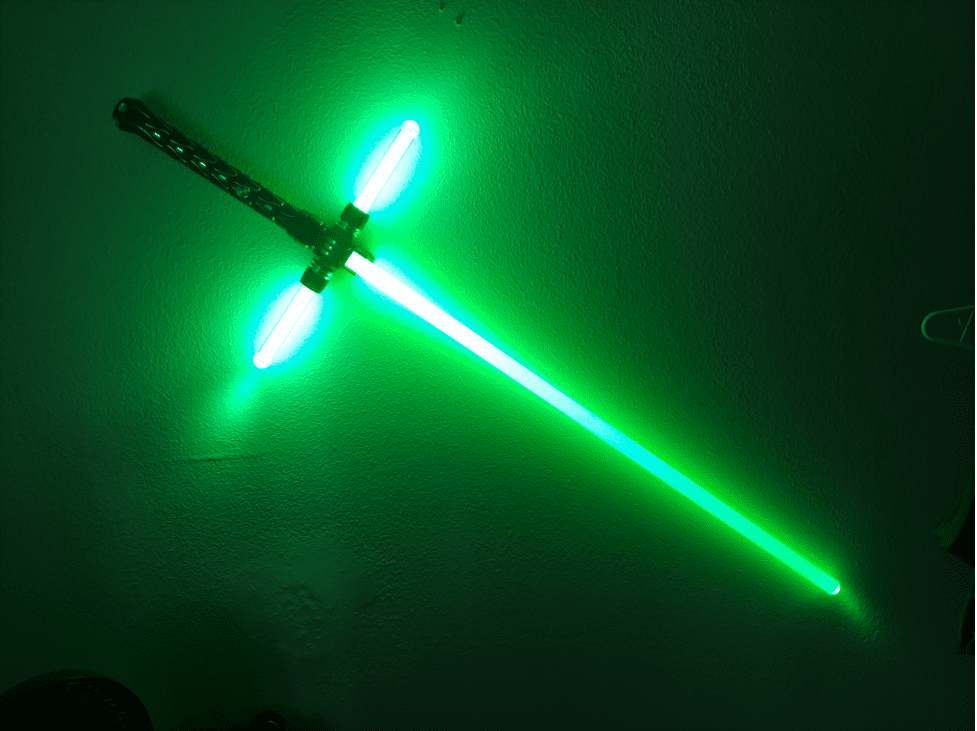 More than a few Star Wars fans will tell you that their favorite character in the third trilogy is Kylo Ren, the son of Han Solo and Leia Organa and one-time Jedi apprentice who became dreaded master of the Knights of Ren and, later, Supreme Leader of the First Order before finally breaking away from the dark side.

Ren has inspired quite a bit of debate among fans, much of it centering on his distinctive combat style and his preference for crossguard lightsabers. What follows is an attempt to shed light on Ren’s choice of armament and his preferred tactics on the battlefield.

Ren’s crossguard lightsaber is far from unique. Sporting two secondary blades (quillons) protruding from the top of the hilt at 90-degree angles, it is actually based on a design that was created thousands of years before his birth. The first known appearance of the crossguard lightsaber occurs in the Great Scourge of Malachor, an infamous battle of the pre-Cold War era between the Jedi Order and the Sith Empire in which every combatant on both sides was slain. Their petrified bodies, as well as a battered old crossguard saber, were discovered thousands of years later during an expedition carried out by Ezra Bridger, Kanan Jarrus, and Ahsoka Tano.

However, Kylo Ren’s lightsaber does have a characteristic that could be called unique. Powered by an unstable kyber crystal, the saber emits an oddly “ragged” blade. The instability of the crystal explains the use of the quillons, which are intended primarily to act as release valves of sorts that keep the plasma blade under control. The quillons also serve to protect Ren’s hand during combat.

Kylo Ren apparently did not regard the unstable nature of his lightsaber blade as a defect; in fact, he seems to have treasured it largely due to this quality. His lightsaber was his constant companion during his years as a servant of the dark side. He would abandon his saber only upon making his decision to reclaim his birth name, Ben Solo, and rejoin the Jedi cause.

Which of the seven traditional lightsaber combat forms did Kylo Ren employ? The evidence isn’t entirely clear, but it is most likely that he was an adherent of Form V, particularly the Djem So variant. Ren’s fierce fighting style has the hallmarks of Djem So, which demands a high degree of speed and strength to execute a flurry of attacks and counterattacks. His ability to deflect blaster fire in deft fashion is another characteristic of the Form V master.

It’s true that Ren sometimes drew upon tactics more commonly associated with other forms. For instance, he sometimes utilized the Form VI Niman practitioner’s ploy of calling on the Force to push or pull opponents into positions where they could be more easily attacked. And he occasionally executed the kind of acrobatic maneuvering characteristic of Form IV Ataru.

Nonetheless, Ren probably was, on the whole, an adherent of Djem So. That’s only logical considering he learned combat as a young Jedi apprentice from his uncle Luke Skywalker, himself a noted practitioner of Form V Djem So.

You can learn more about lightsaber combat and other Star Wars topics in the Ultrasabers’ online community on SaberForum.com.  Or, if you’re ready to start practicing your own Djem So- you can explore our huge inventory of custom lightsabers.  Don’t hesitate to contact us with any questions!