In Star Wars, Rey’s lightsaber definitely stands out. We’ll take you through everything you need to know about Rey’s yellow lightsaber, from the color itself to the hilt design and other details about all the lightsabers Rey wields.

Whose Lightsaber Does Rey Use Before Constructing Her Own?

Before constructing her own lightsaber, Rey uses Luke Skywalker’s first lightsaber, which is actually Luke’s father Anakin’s lightsaber — the most storied weapon in all of Star Wars canon. This is the Skywalker lightsaber seen throughout the original, prequel and sequel trilogies.

Rey finds Anakin/Luke Skywalker’s lightsaber in Maz Kanata’s castle after it calls out to her from a chest hidden in the basement.

How Did Maz Get Luke’s Lightsaber?

We’ve yet to discover how the blue lightsaber that belonged to Luke and Anakin Skywalker wound up in Maz Kanata’s possession amongst her massive collection of antiquities. She merely remarks that it’s a “story for another time.”

What Color Is Rey’s Lightsaber?

At the end of Star Wars: Episode IX – The Rise of Skywalker, we see that Rey has finally constructed her own lightsaber, having reached the end of a long journey and completed training with both Lukeand Leia. In a first for live-action Star Wars media, Rey’s lightsaber color is yellow.

This final scene is also when she takes on the surname of her masters, referring to herself as Rey Skywalker. As such, many fans call her yellow blade the Rey Skywalker lightsaber. 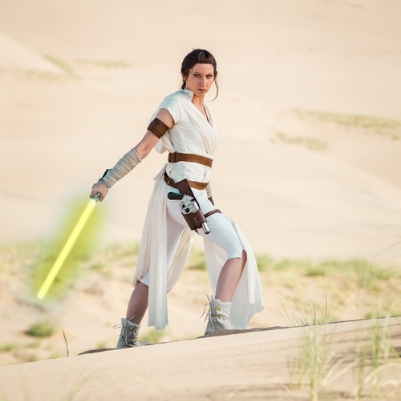 Rey’s lightsaber is unique beyond its yellow color. In fact, Rey’s lightsaber hilt is based on the design of the quarterstaff she carried as a scavenger on Jakku. It even utilizes materials from the staff itself, including a cloth handgrip. The single-bladed lightsaber hilt also has a similarly heavy armored appearance.

Additionally, Rey’s yellow lightsaber hilt features a rotating activation switch, which is very different from most lightsabers’ straightforward switches and buttons. It has a rotating emitter that looks similar to a gear, another nod to her scavenger days. As the switch turns, there are brief flashes of green and blue from the kyber crystal inside. All of this combines to make Rey Skywalker’s lightsaber hilt unique to her — and to Star Wars canon.v

Why Does Rey Have a Yellow Lightsaber?

It’s certainly unique, but why is Rey’s lightsaber yellow in Rise of Skywalker? While we may not have a stated reason, the yellow lightsaber Rey creates carries immense symbolic meaning. First of all, traditional yellow lightsaber lore relates to the Jedi Sentinels, a middle ground between the combat-focused Guardians (who are associated with blue lightsabers) and the diplomacy-oriented scholars called Consulars (green lightsabers). The Sentinels believed in the importance of knowledge outside the Force, which Rey would likely agree with as a former scavenger. The Jedi Temple Guard also carried yellow lightsabers, as seen in The Clone Wars.

At this point, Rey is the “last Jedi,” or the first of a new Order she’ll have to start herself. She carries within her the knowledge and history of all those who’ve come before — so it makes sense for Rey’s lightsaber to be yellow, representing a combination of the main schools of Jedi thought. This is also likely why Rey Skywalker’s lightsaber color flashes blue and green before emitting its yellow blade (along with being a tribute to her masters, Luke and Leia). However, while she carries that history with her, the fact that Rey has a yellow lightsaber, a rare color, shows that she’s going her own way, released from the bonds of her past

How & Where Did Rey Get the Yellow Lightsaber?

Since we don’t see its creation on screen, and it only appears in one scene, we don’t exactly know how and where Rey got her lightsaber. However, it’s safe to assume that she constructed it herself, as forging a lightsaber is a sacred tradition for Jedi, one of which Rey would surely be aware. Also, novelizations of The Rise of Skywalker have revealed that Rey’s new lightsaber was being constructed on Ajan Kloss, the moon on which the Resistance had a base during the war against the First Order — and where Luke had begun training Leia.

How Did Rey Get a Yellow Lightsaber Crystal?

Again, we don’t know exactly, but unless she found an old Jedi Temple Guard pike, Rey likely found a cache of pure kyber crystals and bonded one to her. A crystal embodies the Jedi as the heart of the lightsaber, and pure kyber has no color until it’s bonded to the Force user. This process likely resulted in Rey Skywalker’s lightsaber being yellow.

However, some fans have speculated that perhaps Rey purified a red kyber crystal — maybe that of her rival-turned-partner Kylo Ren, with whom she is part of a Force dyad.

Whose Lightsaber Does Rey Have at the End of The Rise of Skywalker?

In addition to her own yellow lightsaber, Rey Skywalker has Leia’s lightsaber and the Skywalker lightsaber (which belonged to Anakin, Luke and Rey herself) at the end of The Rise of Skywalker.

Why Did Rey Bury the Lightsabers?

Since Luke and Leia, her masters, have become one with the Force, this is her way of honoring them by putting their weapons to rest. It also shows that Rey is burying the past while carrying it with her — both in her spirit and in the lightsaber she now wields.

How Does Rey Have Luke’s Lightsaber in Rise of Skywalker?

We can assume that Rey rebuilt the Skywalker lightsaber after it was broken in The Last Jedi. The Star Wars Visual Dictionary says she repaired the kyber crystal “using techniques gleaned from the Jedi scripture,” and we see her using a Force Heal ability in the film.

What Is the “Dark Rey” Lightsaber?

In The Rise of Skywalker, Rey finds out she’s actually Rey Palpatine and a descendant of her biological grandfather Emperor Palpatine. While on the remnants of the second Death Star looking for the lost Sith Holocron, Rey experiences a dark side vision of her possible future. This “Dark Rey” wields a double-sided red lightsaber and tells her not to be afraid of the darkness inside of her. Dark Rey’s double-bladed lightsaber has a hinged design that flips out to form a staff that somewhat resembles Darth Maul’s lightsaber. Despite showing up very briefly, Rey’s red lightsaber has become a fan favorite. The Rise of Skywalker novelization reveals that Rey Skywalker’s yellow lightsaber was crafted to be the exact inverse of the Dark Rey lightsaber.

What Lightsaber Form Does Rey Use?

At first, Rey primarily fights with a lightsaber the same way she would have with her quarterstaff. However, after studying Luke’s Jedi scripture and training with Leia, Rey probably uses Form VI: Niman, a jack-of-all-trades lightsaber form that combines different aspects of Forms I through V. If we see more of Rey Skywalker’s yellow lightsaber in the future, we’ll likely see how her form has evolved, as well.

“I didn’t know there was this much green in the whole galaxy.” —Rey

Find Your Place in All This With a Custom Lightsaber

To be like Rey in Star Wars, a lightsaber is the first step toward a larger galaxy. We have incredible custom lightsabers that you can build to your exact specifications. Craft yours today!

Which Character Wields a Yellow Lightsaber? Among all the lightsaber colors in the known Star Wars universe, yellow is one of the most uncommon—but it recently became less uncommon with the release of The Rise of Skywalker…
What Is the Meaning of the Yellow Lightsaber? Yellow lightsabers have always been linked to the Jedi, whether you’re talking about accepted canon or about the non-canon Legends. It is true, however, that a yellow lightsaber…
Why Is Rey’s Lightsaber Yellow in Rise of Skywalker? Now that Star Wars Episode 9: The Rise of Skywalker has completed its impressive run at the box office (to the tune of…