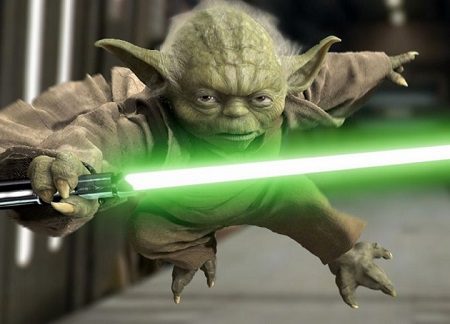 With so many lightsaber colors in the Star Wars universe, it can be difficult to recount which character wields which saber.  In this series of articles, we will be discussing three celebrated Jedi Consulars that carried green lightsabers, their history, fighting style, skill set, and any rare abilities.

Yoda is an iconic character in the Star Wars universe.  Living to be nearly 900 years old, this mysterious being stood only 2 feet 2 inches tall.  His height was deceptive, leaving less knowledgeable opponents underestimating Yoda’s phenomenal lightsaber skills and Force abilities.  A list of his notable achievements includes:

Yoda perished after falling ill in his old age.  With his dying breath, Yoda confirmed for Luke Skywalker that his father was, in fact, Darth Vader.  Prior to his death, Master Yoda was contacted by Qui-Gon Jinn who made Yoda aware that it is possible to maintain consciousness after death and live on as a bodiless spirit. From there Yoda embarked on a journey to discover the secrets of immortality and was deemed worthy by a group of Force Priestesses to unlock this magnificent ability.

Master Yoda was highly skilled in the ways for Form IV lightsaber combat, also known as Ataru.  This was a swift form of combat that included elements of force-assisted acrobatics (somersaults, flips, leaping strikes, etc.) and powerful attacks that came from multiple angles.  This form of combat is extremely taxing on the body of the duelist, considering the elaborate focus on gymnastic maneuvers.

Some of Yoda’s additional powers include the skill to deflect Force lightning from Sith opponents, incredible telekinetic abilities which also allowed Yoda to uncover the alignment of a Force-user by touching them.  Yoda was also gifted with Force visions and the ability to communicate telepathically with other Jedi across vast distances.

Qui-Gon Jinn was a Master Jedi with strong ties to the Jedi Order and the Galactic Republic. As a young Padawan, Qui-Gon Jinn was an apprentice to Master Dooku, prior to his turn to the Dark Side. Qui-Gon was known as a maverick, disobeying the Jedi Code and following his morals if he felt that his decision was the correct one to make.  A list of his notable achievements includes:

Qui-Gon met his death in Theed, the capital city of Naboo. Obi-Wan Kenobi and Qui-Gon Jinn arrived in Theed only to be confronted by Darth Maul where a legendary battle ensued.  The two Jedi fought Darth Maul across a massive stretch of a hangar. Maul was clearly dominating the two Jedi with his dual-sided lightsaber staff.

Eventually, Darth Maul was able to separate Kenobi and Qui-Gon, leaving Jinn to battle the Sith Lord without the assistance of an apprentice.  Although a skilled duelist, he was not able to defeat Darth Maul. Just as Obi-Wan was about to reach Jinn, Maul stabbed Qui-Gon through the torso, fatally wounding him.

Like Master Yoda, Jinn was an expert in Form IV.  Qui-Gon Jinn demonstrated exemplary skills with the Force.  He mastered the use of telekinesis and mind tricks to gain the upper hand on unsuspecting foes. Jinn’s true power came in the form of the Force spirit, leading to a chain of events that would spark victory for the Jedi time and time again.

Luke Skywalker is yet another highly recognizable and significant character as it relates to the history of the Star Wars universe. Born to the then Anakin Skywalker and Senator Padme Amidala, Luke was taken by Obi-Wan Kenobi to the planet Tatooine after Padme died in childbirth.

Luke spent his childhood hidden with his relatives, the Lars family, on Tatooine until Kenobi reconnected and taught Luke in the ways of the Force and lightsaber combat. It was then that Kenobi gave Skywalker his father’s lightsaber, but was lost when Darth Vader cut Luke’s sword-hand off during battle.  A list of Luke’s notable achievements includes: