Like all modern Star Wars media, story-based video games are considered canon. However, due to the nature of video games being an interactive medium, that canon is a bit looser than usual. In Star Wars Jedi: Fallen Order, Cal Kestis’ lightsaber color, design, form and more are at least partially determined by the player. The game offers thrilling Souls-like combat, rich Metroidvania-type progression and a compelling protagonist in Cal Kestis, portrayed via voice and motion capture by actor Cameron Monaghan.

Among video games set in the world of Star Wars, Cal Kestis’ lightsaber has already become one the most iconic weapons. Join us to explore the facts surrounding the lightsabers Cal Kestis uses — including what counts as canon.

Cal Kestis’ First Lightsaber After Order 66 — The Blade of His Master, Jaro Tapal

Being a survivor of Order 66, Cal Kestis was lucky to have Jaro Tapal’s lightsaber to protect himself from the Inquisitors while in hiding — though he eventually revealed himself to the Second and Ninth Sisters. Later, the saber’s kyber crystal was cracked on Dathomir, forcing Cal to craft a new one.

This damaged version of Cal Kestis’ lightsaber, used early in the game, has become incredibly popular among fans. So popular, in fact, that it was voted to join Dok-Ondar’s Den of Antiquities — the first hilt from a video game to be included.

Cal Kestis travels to Ilum to craft his second lightsaber. To do so, he uses the remnants of Jaro Tapal’s lightsaber along with the hilt given to him by Cere Junda, a former Jedi Knight who helps him on his journey. Using a split kyber crystal from the cave on Ilum, Cal Kestis builds a double-bladed lightsaber with a hilt that can separate, allowing him to dual-wield using Jar’Kai.

Cal Kestis’ double-bladed lightsaber gives the player complete control over how to engage in combat, as one or both blades can be ignited. 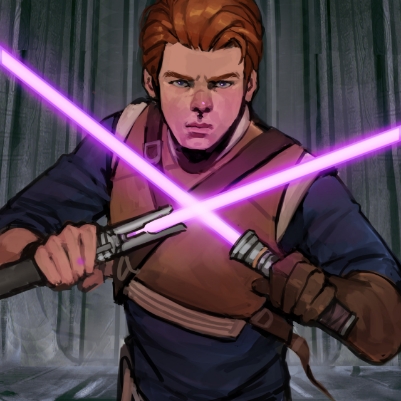 At this point, you might be asking, “What color is Cal Kestis’ lightsaber?” This topic is up for discussion because Jedi: Fallen Order allows players to customize Cal Kestis’ lightsaber color to their liking. Along with customizing the material, sleeve, switch and emitter, players can choose a lightsaber color (though most must be unlocked by visiting Ilum). Options include the following, some of which appear here for the first time in modern, non-Legends canon:

Since the game itself is canon, fans have to speculate on Cal Kestis’ canon lightsaber color — but by all accounts, the answer is blue. The cut scenes and promotional materials show him with a blue lightsaber, as does other merchandise, like the Black Series action figures. That said, many are calling for the upcoming sequel, Star Wars Jedi: Survivor, to make Cal Kestis’ orange lightsaber canon, arguing that the change would be in line with his character arc while also giving him a unique blade.

What Lightsaber Form Does Cal Kestis Use?

Since he didn’t complete his training, Cal Kestis’ form does not adhere to one particular style. Fans have noted similarities to specific lightsaber forms, particularly Form I: Shii-Cho and Form VI: Niman. Additionally, since he dual-wields, Cal Kestis definitely uses a form of Jar’Kai. Cameron Monaghan has also said that Cal Kestis’ form was inspired by his own real-life martial arts experience.

“I guess it’s about time I find out who I am.” —Cal Kestis

Customize Your Own Lightsaber Now

You’ve already built Cal Kestis’ lightsaber in the game. Now it’s time to build your own. Check out our full selection of customizable lightsabers today and find your purpose in the Force.