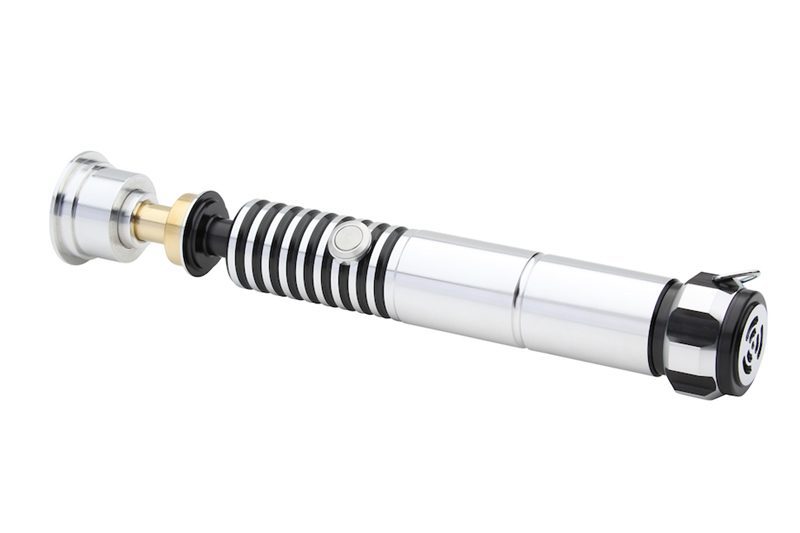 What is a Lightsaber Hilt?

Your lightsaber hilt is more than just a pipe with the galaxy’s most elegant weapon sticking out of one end. It is the character of your saber, and the secret to all of your combat prowess! It is covered in character and brought to life through designs, patterns, shapes, and features that define it as your own! Each feature on your saber adds to your power as its master, and we’re here to give you a little rundown on what we know best.

For many saber-owners, the look and aesthetic of a saber is what draws them to one lightsaber hilt or another. Maybe a massive, rugged saber featuring a grenade style, deep-grooved grip tickles your fancy? Or the alternative, a shorter design featuring a slender, smooth, and rounded grip that leads into a regal and elegant emitter? While there’s nothing wrong with selecting a lightsaber based on its looks to represent you in battle, many masters are purchasing their saber exclusively for combat, making every feature on the hilt critical, including the lightsaber grip.

The size shape of the lightsaber hilt is arguably the most critical aspect of the saber, since it will dictate just what its master can and cannot do in combat. Choke points on lightsabers are perfect examples and possibly the most important features to consider on a saber, as they give their wielder the ability to spin and twirl the saber more easily than if the saber were a uniform shape.

The choke point on a lightsaber is the thinnest point of the hilt, and is typically where the user’s main hand will rest when grasping the weapon. In addition to comfort, it allows them to twirl or spin the saber when blocking blaster fire, or picking up momentum for an attack. The choke point on a saber is most commonly near the top of the hilt near the emitter, since this is the center of the saber’s balance. The closer the choke point is to this point, the easier it will be to spin, and will give its master the greatest level of control over the weapon. Having multiple choke points on a lightsaber will give the wielder the ability to switch the placement of their hand when spinning for either speed or power in their strikes.

While your hand may consistently rest on a choke along the lightsaber, each hilt will have a main section that is intended for the offhand when using two hands to wield. This section can feature a rigid design, or a smooth beveled surface with machined grooves like on The Guardian, designed to comfortably give hands a position for a firm grip on the saber.

The lightsaber hilt is also home to several components such as the covertec wheel that will clip the saber to your belt, and the ignition, or on/ off switch for the saber. The placement of these will affect the usefulness of the saber in combat, from drawing the saber for combat, to ensuring that it will stay lit during the fight!.

Ultrasabers hilts are crafted to accommodate MHS compatible Pommels and Emitters, giving you endless possibilities when customizing your lightsaber, meaning that you can craft the perfect weapon to your fighting style.

Every saber will have its strengths and weaknesses for various fighting styles! Be sure to test each saber with various forms of combat!