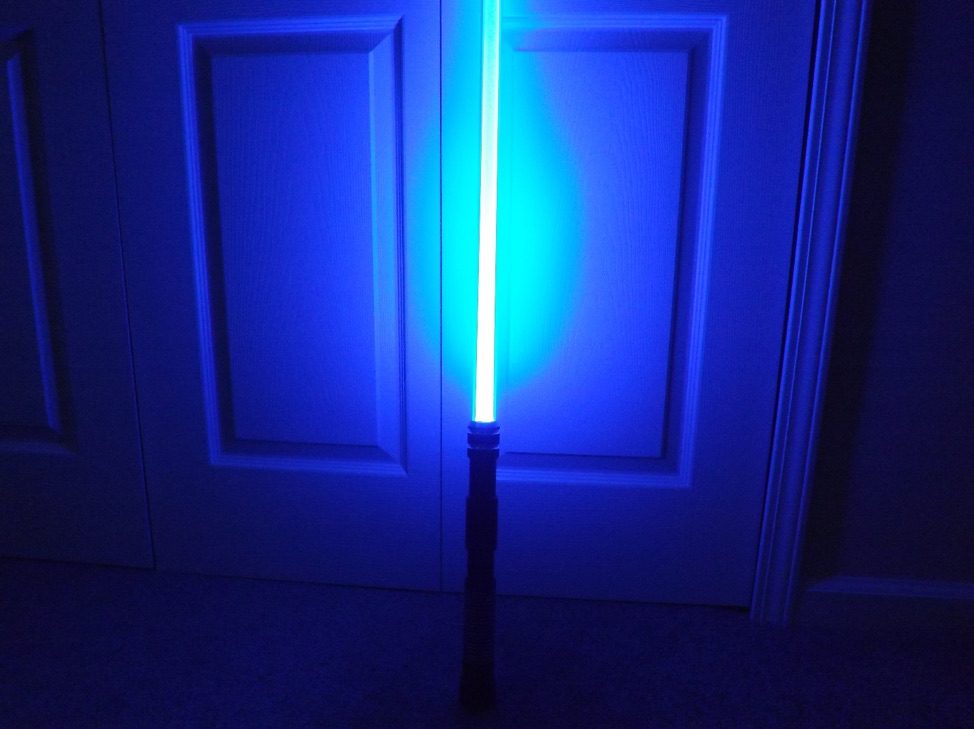 What Is a Lightsaber Blade Made Of?

The lightsaber is an undeniably awesome creation, and it wouldn’t be a stretch to claim that it is the single most famous component of the Star Wars universe, more widely recognized than Luke Skywalker, the Death Star, TIE fighters, or any other canonical element. Even the sound of the lightsaber—that distinctive undulating hum—is famous.

It’s also true, however, that even a lot of dedicated fans don’t really pay attention to the composition of the lightsaber beyond its most superficial features. They just know it’s a laser-like blade that looks cool and cuts through things. If you’re really serious about lightsabers, you should understand what goes into the making of these powerful sabers. This is as good an occasion as any to take a look at the inner workings of the world-renowned lightsaber blade—as it exists in Star Wars canon as well as right here in 21st century Earth.

Let’s begin with the lightsaber as it exists in the cinematic world originated by George Lucas and his collaborators. Remember, when we talk about the blade of a lightsaber, we mean the damage-causing cylindrical portion that protrudes from the hilt (handle). The blade can cut with equal effectiveness from any direction, and the force of its impact does not depend on the physical strength of its wielder. That’s why younglings must be extremely careful when handling their lightsabers—it’s easy to hurt yourself with these things because even momentary, casual contact can lead to serious injury.

What are these blades made from that makes them so dangerous? Not light, despite what the name might seem to imply. Lightsaber blades are pure plasma, a moldable electromagnetic state of matter that, when emitted from a hilt, can slice through most known substances with ease. Lightsaber plasma, in addition to its combat utility, is also bright enough to use as a close-range source of light.

Plasma is commonly associated in the Star Wars universe with the planet Naboo. On Naboo, plasma can be found in abundance in the planet’s crust, from which it is frequently extracted and then put to practical use as an energy source with wide-ranging applications.

Lightsaber blades don’t come from Naboo, however. They basically come from kyber crystals that occur naturally, if uncommonly, on various planets throughout the universe. These crystals are attuned to the Force, and when they are properly attached to a hilt, they are capable of emitting on command the powerful blade that makes the lightsaber such a deadly combat apparatus.

Traditionally, kyber crystals could be found in relative abundance in the sacred Jedi-controlled Crystal Cave of the planet Ilum. It was customary for Jedi younglings to explore the Cave to find their own kyber crystal, in a rite of passage known as the Gathering.

Lightsaber Blades in the Ultrasabers Universe

The lightsabers available through Ultrasabers do not employ plasma energy. Instead, their blades are made from tough polycarbonate tubing, with film inside to promote strong illumination. Polycarbonate is a thermoplastic polymer noted for high impact resistance. That’s what makes our polycarbonate lightsaber blades so effective for sparring purposes. They can even be brought into play in full-contact fights without fear of damaging them.

If you’re interested in purchasing one of our polycarbonate lightsabers, please feel free to explore the various models for sale on this site. You can read up on the right color choice for you or take this simple “What lightsaber color are you?” quiz to find out if you possess the power of a Jedi to wield a blue lightsaber, green lightsaber, purple lightsaber, or white lightsaber. Or, do you side with the Sith and require a red lightsaber? We have available options for you no matter what side you side with!

You can also check out our official discussion forum at SaberForum.com for a wealth of tips, tricks, and suggestions for getting the most out of your lightsaber. And don’t hesitate to contact us with any questions you have about our product line.